Sacramento County Supervisor marches to Napa in solidarity with UFW 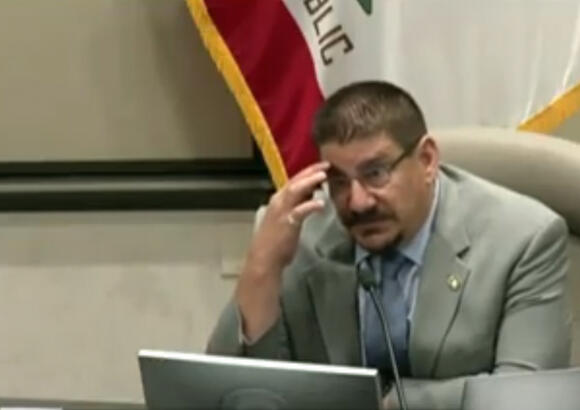 Serna sent a letter urging the Governor to sign AB 616, which he vetoed Wednesday.

“Governor Newsom, you have said, ‘I think making voting easier, providing more choice and more opportunity is fabulous.’ I could not agree more,” Serna said. “That's why I appeal to you to sign AB 616, the Agricultural Labor Voting Choice Act.”

AB 616 would have allowed farm workers to form a union by casting a secret ballot, similar to how California voters did in the Recall Election.

“My entire life, I and my family have been proud to stand alongside the United Farm Workers (UFW) and the workers that feed all of us,” Serna said in his letter.

Today farm worker representation elections are conducted the way political elections were held in 1975 according to Serna.

“Since then, California's election process has changed in important ways to encourage and make it easier for people to exercise their right to vote, including greater ease with which to register,” Serna said.

The UFW is now marching to French Laundry, a Napa County restaurant, to force a meeting with the Governor.

“Following news of the veto, the union said its members would instead march toward the famed restaurant in Napa County, where Newsom is known to have dined in the past,” UFW said via Twitter.

The group plans to march 260 miles and arrive around 1:00 pm Saturday.

“Saturday we rally at the French Laundry, then we march to his winery,” UFW said.

Supervisor Serna is planning to join the UFW in Napa.

“Hope to see you in Napa this weekend. I’ll be marching in solidarity with the UFW y los campesinos que representan!” Serna said via Facebook. “¡Sí se puede!”

Samual Nathaniel Brown on graduation day in California State Prison, Los Angeles County on Oct. 5, 2021.(Photo by Robert Huskey/Cal State LA) On October 5, 2021, Samual Nathaniel Brown, co-founder of the Anti-Violence Safety and Accountability Project (ASAP), creator of the 10P program, and author of the constitutional amendment proposal, The California Abolition Act (ACA 3), recently became one of the first along with 24 other men to graduate with a bachelors in communication from Cal State LA’s Prison B.A. Graduation Initiative on the yard at California State Prison Los Angeles County in Lancaster California.

“They made her homeless,” San Joaquin deputy DA says about Sacramento woman’s home taken by City

Wanda Clark is a victim of elder abuse and made homeless by the City supporters say. Wanda Clark locks the door of her home that is to be auctioned off next month on October 5, 2021(Photo by Robert J Hansen)

The possessions of a homeless person on Capitol Mall Drive in Sacramento on Saturday, September 11, 2021.(Photo by Robert J Hansen) Wages and supply of affordable accessible housing.

“This is a broad patient care issue across Arizona hospitals,” spokesperson says. The Mayo Clinic is experiencing “extremely high patient volumes” due to Covid-19 care and other factors which are affecting most hospitals in the Phoenix area, according to Jennifer Ruble, a spokesperson for Mayo Clinic.

Amelian Tremond Edwards died in a car accident on Bradshaw Road in Sacramento County on Sunday, August 29, 2021.Courtesy Olivia Edwards. Amelian Tremond Houff crashed at 4:53 am and died while calling for help for hours in his vehicle as Sacramento Police Department (SPD) officers gave him and the other passenger conflicting commands to exit the clearly mangled vehicle.

Michael Barrera was killed by Woodland police officers while handcuffed having never been a threat in February 2017, but the police told a false narrative that the media ran with.

The plaintiff in a recent lawsuit filed against the City of Sacramento, allegedly verbally threatened and brandished a gun at homeless people near his business last December. Rich Eaton, a former San Diego Sheriff’s deputy, is named by three victims in police reports obtained through confidential sources.

Sacramento police searching a vehicle after a traffic stop.Public Safety News. Sacramento police officers let Amelian Tremond Houff die while calling for help for hours in his vehicle as officers gave him and the other passenger conflicting commands to exit the vehicle last month.

Lionell Tholmer was convicted for the murder of Cynthia Sparpana and her daughter Danyel, on Nov. 14, 1992, convicted by an all-white jury, and sentenced to death. Sparpana was found dead on November 5, 1985, in Yolo County two days before the body of John Meadows was found near Foresthill Road in Placer.

Sacramento man killed at homeless encampment in July, no arrests made

A friend of Michael Dorr relighting candles at his vigil on Tuesday, August 24, 2021.Photo by Robert J Hansen. Michael Dorr was stabbed and killed by unknown assailants at a homeless encampment on Lathrop Way in Sacramento on July 22.

Driving is a right, not a privilege

Sketch of Dred Scott (above) and The American Center for Mobility (below).Image by Robert J Hansen. Nothing symbolizes and embodies American freedom like the automobile and though driving is not a Constitutionally protected right, unimpeded mobility is.