Analyzing the Finances and Economics of the World .. Investing | Economics | Business

Due to icy conditions, the Mackinac Bridge has been closed. Winter weather is also passing through the state. 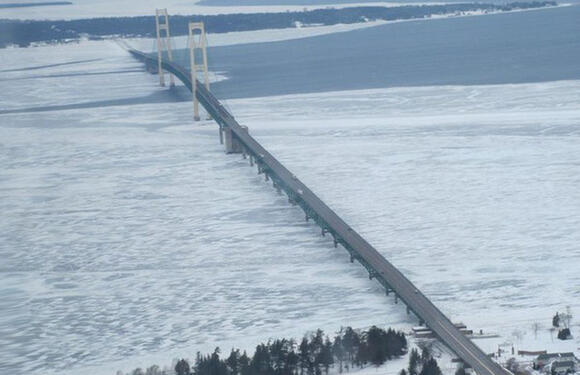 Mackinac Bridge closed due to icy condition. Other winter weather moving through the statePhoto courtesy of U.S. Coast Guard Air Station Traverse City
Officials reported in a tweet Saturday afternoon that the Mackinac Bridge is closed due to falling ice, the latest severe weather to hit the state.

Because it's difficult to forecast how long it'll take for the ice to melt, there's no set a date for when the park will reopen. Drivers are encouraged to stay away from the area so that maintenance vehicles can pass.

According to a tweet from the bridge's account, falling ice is "excellent news because the sooner it falls, the sooner we can reopen," but "we still can't anticipate how long the procedure will take." Just before 5 p.m. on Saturday, half an inch of ice had formed.

The bridge has been closed multiple times in recent weeks due to falling ice as the cold weather has persisted. The National Weather Service said that it would be cold with light wind for the rest of the weekend near Mackinaw City, with a chance of snow both Saturday and Sunday night.

Rain is forecast in metro Detroit before 1 a.m. Sunday, followed by a probable rain/snow mix. On Sunday, the National Weather Service in Detroit forecasts a high of 48 degrees with clouds and winds of 9 miles per hour.

According to the meteorological service, clouds are expected to persist into Monday, with showers probable before 2 p.m. Temperatures are predicted to be in the mid-50s this week, with highs in the mid-60s on Tuesday, Wednesday, and Thursday.

Rain is expected throughout the week, with most of it falling later in the afternoon.

Analyzing the Finances and Economics of the World .. Investing | Economics | Business