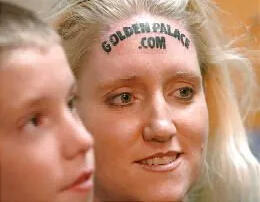 She was a divorced woman and her boyfriend was not rich enough to be able to send her son to a private school. She knew that she had to earn the money for herself. She decided to sell her forehead on eBay as an auction space. She promised that whoever pays the highest bid on her forehead space will be able to put a permanent tattoo of their name on her forehead.

Her idea turned out to be successful because she got enough money to pay for her son's tuition fees in a private school. In exchange, she became a living and walking advertisement for the company which considered her forehead advertisement tattoo a successful marketing decision.