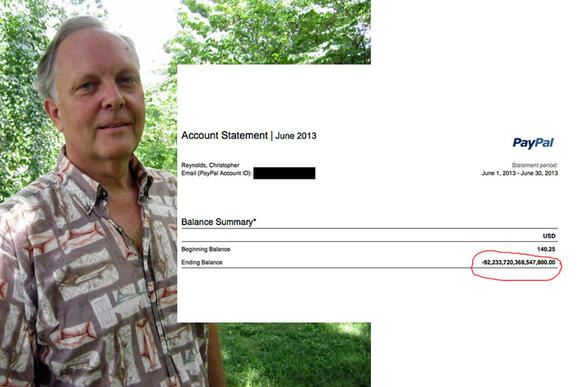 Initially, Chris thought that it was the amount he owed to his creditors due to the negative sign on his ending balance. Later he noticed that it was in fact the amount transferred to his bank account. The exact amount credited to his account was $92,233,720,368,547,800.

$92 quadrillion was at least a thousand times higher than the GDP of the whole world at that time. That amount was also 5,411 times the national debt of the USA. This transfer made briefly made Chris the richest man in the world. That amount of money would also make him 415,000 times richer than Elon Musk.

Later, it was found that Paypal credited that amount to his account by error. 2 minutes after refreshing the page to double check his account balance, he saw that his balance was $0. Paypal later apologized for their error and offered to donate some money to any charity of Chris's choice.

The error made by Paypal also made Chris Reynolds the world's only quadrillionaire for a brief moment of time. He told the interviewers that he was a very responsible person and that if he could keep the money, he would pay the national debt of the USA.

Before becoming a quadrillionaire for a brief moment, Reynolds worked as a buyer and seller of vintage parts on eBay.

On 16 June 1944 George Stinney Jr. became the youngest person to die on the electric chair in modern history. He was convicted of the murder of 2 young girls and the jury took 10 minutes to make their decision of giving him the death sentence. However, there was no tangible evidence, no witnesses, and no strong reason to accuse George of the crime.

Parents sue their son for not giving them a grandchild

An elderly couple in India sues their only son for not giving them a grandchild. They filed a petition claiming $643,000 in damages against their son and their daughter-in-law. Their 35-year-old son, who works as a pilot, has not been able to give them a grandchild which has caused them a great deal of sadness and led them to sue him.

Will you survive if you dived from an airplane into the sea?

Ashley Keast is often described as one of the worst burglars to ever commit the crime of stealing. He was 25 years old when he broke into a house in Rotherham, England. He intended to steal valuable items while the owner of the house was away but he did a mistake while doing the crime that would later lead to his arrest.