Why do wars happen? 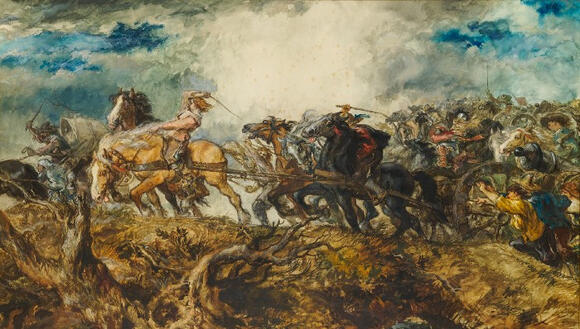 Wars have been happening among humans for hundreds of thousands of years. Humans have been fighting among themselves ever since the human race began. Humans are the only species on this planet to fight the highest number of wars against each other. Historians say that the earliest war that the human race ever fought was against the Neanderthals (a subspecies of human beings). The Homo sapiens (the human race) won the war and made the Neanderthals an extinct species. This happened approximately 40,000 years ago.

Archeologists have found evidence that the first prehistoric war was fought along the Nile River near the Egypt-Sudan border. The remains of the dead bodies of that war have been dated to the Mesolithic era, more than 13,000 years ago.

The first war in recorded history took place in Mesopotamia in 2,700 B.C. between the forces of Sumerians and Elamites. King Enmebaragesi, the king of the Sumerians, led the Sumerians to victory over the Elamites in that war. This happened approximately 4,721 years ago.

The unfortunate thing is that wars and conflicts going on in the present day too. There are many regions in the world that are still under conflict.

A good example of attacks done for economic gain is the raids that the Vikings did in England and France and the colonization done by many European countries towards the end of the medieval era. The raid on Lindisfarne, the Battle of Plassey, and the Opium Wars are some notable wars fought for the sake of economic gain.

Wars fought for acquiring new territories have been happening for thousands of years. Throughout history, ambitious kings wanted to acquire more territories under their rule to become more powerful. Many kings desired to convert their kingdoms into empires. There are various motives for acquiring new territories. Conquering other kingdoms led to more economic gain, more influence over the region, and status of power.

Conflicts often arise when two countries claim a particular region as a part of their country. These wars often happen when countries try to expand their border. Some examples of wars that happened for territorial gain are the Mexican-American War of 1876 for Texas, Santa Fe, and California, the India-Pakistan War of 1971 for Kashmir, Arab-Israeli Wars for Jerusalem, and many others.

These are the wars that were fought to establish the dominance of one religion over the other in a particular territory. These wars also happen when conflicts arise between two or more religious groups.

Religions have been the cause of many wars and conflicts throughout history. Scholars say that the potential to cause so many conflicts is one of the bad effects of religion. Some notable examples of wars that happened for religious purposes are the Crusades, The Thirty Years’ War, The Eighty Years’ War, The Arab Conquests, and many others.

Nationalism refers to a political ideology where an individual believes that their loyalty and devotion to their country must be of higher importance than any other interests. Nationalistic wars are often fought to gain sovereignty for a particular nation or to exert the dominance of one nation over the other.

Wars of independence, insurgencies, and ethnic conflicts are also based on nationalistic motives. Some notable examples of wars that happened due to nationalistic reasons are the Yugoslav Wars, the Napoleonic Wars, the Nazi Conquests, and many others.

Many wars have been also fought for the purpose of revenge. The purpose of these wars is to undo the territorial losses suffered by a country from another powerful country. Revenge wars also occur when the whole country takes up arms after an important person from a particular country gets killed by someone from another country.

Another classic example of wars based on revenge is the War on Terror. When a terror attack called 9/11 occurred in the USA where more than 2000 innocent people died, US President George Bush formally started this war by ordering the US army to invade Afghanistan and Iraq.

The 5 key reasons why war happens are as follows: