I am a sophomore majoring in English/Journalism at Chapman University, where I currently work at its student-run newspaper as the Assistant News Editor. I have been interested in reporting ever since my freshman year of high school when the student newspaper followed a statewide district enrollment program that was set to end by the next school year. Since then, I gained an appreciation for local journalism, and I hope to bring coverage to any issues that are affecting local communities. My work has also been seen in the teen-led news outlet, The Cramm, and the Now Simplified Instagram account, which focuses on explaining political issues/events to its followers. 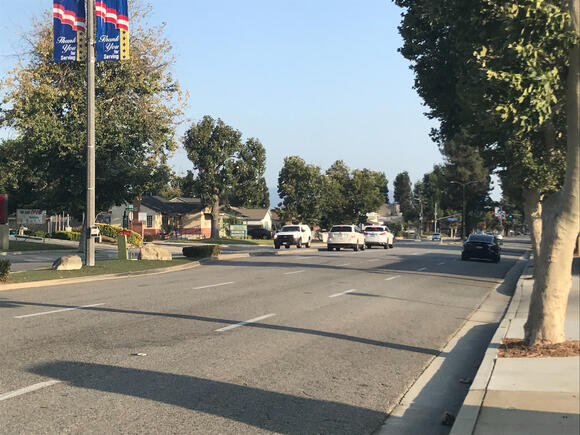 Central Avenue extends from Chino to Chino Hills and is one of the major intersections in Chino.Renee Elefante

(CHINO, CALIF.) Chino will be using a new redistricting process after switching from an at-large election system to a by-district system in 2016, according to a July 6 public hearing.

The hearing was the first of two held before the public is allowed to provide draft maps to the council for consideration. Due to the coronavirus pandemic, the data from the 2020 census that would be used to reflect the current representation in the city has been delayed to October 2021, when the draft maps can start being submitted.

After the city posts the maps to its redistricting website, there will be two meetings where council members will review the maps and make revisions. The ordinance to adopt the maps would be introduced at a later date, and the ordinance would potentially be adopted at the following meeting.

The current voting districts can be found on the city’s website here.

In the at-large system, voters were allowed to vote for any candidate running for the city council as voting districts had not been established. With the by-district system, voters are only allowed to vote for the candidates running in their residence’s district. While the vice mayor and non-mayoral council members are elected through the by-district system, elections held for the mayor are still done via the at-large system.

The National Demographics Corporation, which partners with cities throughout California, Arizona and Nevada primarily, is consulting with Chino throughout the process. Jeff Simonetti, a consultant from the firm, presented the new process and preliminary schedule at the meeting. Simonetti also explained how the voting age populations for Latinos and Asians differed between 2016 and 2021, the difference between neighborhoods and communities of interest, and how the public can get involved.

According to Simonetti, a neighborhood is determined by freeways, major streets, hills and other boundaries. However, communities of interests are defined based on the shared issues pertaining to social, cultural and economic aspects of the community.

The city is currently considering areas such as The Preserve, a newer area in Chino located south of Kimball Avenue and east of Main Street, and the neighborhoods surrounding City Hall. The city is also open to suggestions about other areas from residents, who can call the City Clerk’s office or attend the next public hearing.

Only one resident, Stubbie Barr, spoke up at the July 6 hearing. He said that while Central Avenue physically separates Benson Avenue and Monte Vista Avenue, the area is treated as two voting districts, but both areas have the same socioeconomic conditions. He would like to see the areas be merged into the same voting district.

“They share the same problems and the same concerns, the same social issues, and the same civic problems,” Barr said at the meeting. “So I would really like to see that [the merging] happening. I think it would simplify things if both of the people I’m talking to on opposite sides of Central [Avenue] had the same representative.”

City management analyst Jack Morgan noted little participation at the hearing as the city had just presented the redistricting information and timeline.

“However, I suspect that future redistricting public hearings will have more participation since the City Council will vote to define Chino’s ‘neighborhoods and communities of interest,’ and later on, eventually review and consider draft voting district maps,” Morgan said in an interview with NewsBreak.

He also noted that the city had not received any other concerns and input aside from Barr’s.

According to Morgan, Chino was one of several California cities required to adopt a by-district system by 2016 since the at-large system violated the California Voting Rights Act of 2001 and keeping the system could have resulted in a lawsuit. If the city lost, the district lines would be decided by a state court and residents would lose their say in the matter.

California passed Assembly Bill 849 in January 2020, requiring cities only to adjust their district boundaries after the federal census is taken every 10 years. Cities would be allowed to readjust before the next census if a court rules that a city would have to readjust or the city is transitioning from an at-large system to a by-district system, among other exceptions. The act is also known as the Fair And Inclusive Redistricting for Municipalities And Political Subdivisions Act.

The next public hearing is scheduled for September 7. Residents can continue suggesting neighborhoods or communities of interest to include in the new maps. The map drawing tools will be made available for public use during the meeting and on the city’s redistricting website.

I am a sophomore majoring in English/Journalism at Chapman University, where I currently work at its student-run newspaper as the Assistant News Editor. I have been interested in reporting ever since my freshman year of high school when the student newspaper followed a statewide district enrollment program that was set to end by the next school year. Since then, I gained an appreciation for local journalism, and I hope to bring coverage to any issues that are affecting local communities. My work has also been seen in the teen-led news outlet, The Cramm, and the Now Simplified Instagram account, which focuses on explaining political issues/events to its followers.

No matter what you bring and what you present as a basketball program, if people don't feel safe and comfortable, then it's going to be hard to get people outside of the gym." – Coach T., manager of 3 Point Play Zone.

(CHINO HILLS, CALIF.) Originally founded in 1907 by the private all-boys school Boys Republic, Chino Hills later became known for its addition of Sleepy Hollow, a neighborhood within Carbon Canyon, in the 1920s. In recent years, the city has become known for housing the Ball Brothers, a trio of basketball player brothers who have been making headlines since 2016. Located at least 30 miles from Los Angeles, the city is also known for being a family-oriented community. Let’s take a look at some of the top places that are perfect for weekend visitors and even new and longtime resident families.

Chino Hills residents shop from a political vendor located at Chino Hills Parkway and Pipeline Avenue.Renee Elefante. (CHINO HILLS, CALIF.) Chino Hills is in the process of deciding on new regulations pertaining to street vendors in response to a California Senate bill passed two years ago.

How Chino police are preserving trust, respect with residents

"Conversation with the Community" was held at the Chino Police Department's headquarters.Renee Elefante. (CHINO, CALIF.) The Chino Police Department held a community forum event June 24 in which panelists from the department and local churches discussed the stigma surrounding the police force, as well as how the department can try to keep its longstanding relationship with the city of Chino.

(CHINO HILLS, CALIF.) The Chino Valley Unified School District is currently figuring out its options for the 2021-2022 school year, according to district employees. California officially reopened on June 15, and while the masking and social distancing requirements were lifted for vaccinated residents in many public spaces, students attending K-12 schools must still wear masks.

Brian Johsz, the current mayor, previously worked in national and state government.City of Chino Hills website. (CHINO HILLS, CALIF.) According to Brian Johsz, the mayor of Chino Hills for 2021, a memorable moment of his career was working in the U.S. House of Representatives on Independence Day when he was 21 years old.

Chino Hills sent out a press release after Gov. Gavin Newsom announced that a legal firm would help look into the Kevin Cooper case.Renee Elefante. (CHINO HILLS, CA) Chino Hills mayor Brian Johsz responded to Gov. Gavin Newsom’s executive order issued on May 28, which called for an independent investigation into Kevin Cooper, an inmate who is currently on death row.