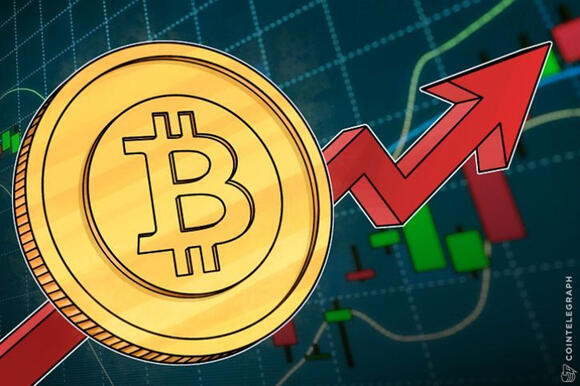 So, the question is: Where does it go from here?

The Sentiment is Bullish

There were many reasons behind Bitcoin pumping today: 1) Morgan Stanley announced they’re going to begin offering access to bitcoin funds for their wealthy clients, making them the first big U.S. bank to do so.

2) Cash App announced they’re extending their support for bitcoin, and users can now instantly send bitcoin to other $cashtags for free, right from their Cash App.

3) Payment giant Visa is still continuing to work towards integrating cryptocurrencies into their systems. In a press release they said:

“We’re trying to do two things. One is to enable the purchase of Bitcoin on Visa credentials. And secondly, working with Bitcoin wallets to allow the Bitcoin to be translated into a fiat currency and therefore immediately be able to be used at any of the 70 million places around the world where Visa is accepted.”

4) The big one: Jerome Powell, the Chairman of the Federal Reserve spoke a few hours ago and said the central bank will continue to keep its interest rate near zero and maintain buying at least $120 billion in bonds each month to stimulate the US economy, even if it does raise inflation. Although most people didn't hear that. Instead, all they heard was, “Buy Bitcoin.”

5) Finally, Americans are set to begin receiving their $1,400 stimulus checks this week and there’s buzz around that a lot of that money will flow into bitcoin. A Mizuho Securities survey estimates that that value could be up to $24 billion.

They interviewed 235 people and found that two out of every five [stimulus check] recipients expect to invest some portion of their checks in bitcoin and stocks. That’s about 10% or $40 billion worth of the total $380 billion that has been appropriated for direct stimulus checks.

Mizuho’s Managing Director, Dan Dolev says, “The survey predicts that bitcoin will account for 60% of total incremental investment spend. We calculate it could add as much as 2–3% to bitcoin’s current $1.1 trillion market value.”

What Do the Charts Say?

Twitter user ‘Rager’ put it simply saying, “BTC is still putting in an uptrend on the daily chart.”

On the lower timeframes, a similar story is told. The 4hr chat shows that we bounced off the trendline at 54,00 and now the bear and bulls are fighting for the support/resistance at 58,300.

The levels to watch above and below are marked, while a crucial support to hold from a bullish perspective is that blue trendline.

If the 58,300 holds, for now, I imagine the bulls will take control and quickly send us to new highs. While if the 58,300 level is lost, there will likely be further consolidation before rising again to look for new highs.

As always, this article is intended for informative purposes only, and should not be used as financial advice. Before making any financial investments, please do your own research.