Rebekah is a long-time digital media professional who has branched out into creating lifestyle content of her own. From 5-star hotel reviews to everyday style, you'll find it here. Follow daily adventures at www.instagram.com/_rebekahbarton

Make Your Christmas Card Photos Pop With an Unexpected Location

Taking Christmas card photos is one of my favorite holiday traditions every year. Coordinating outfits, choosing a location, even wrangling a wiggly toddler or two -- I love it all because I know the end result will be amazing.

I've realized, though, that I've fallen into the trap of taking similar photos annually. If you've been on social media long enough, you know the backdrops -- a red truck laden with boughs of holly, a family happily posing at a Christmas tree farm, children dressed in their buffalo plaid best running through the woods.

While these locations are classic and timeless, sometimes it's fun to think outside the box a little when it comes to finding a Christmas card photo spot that really pops. 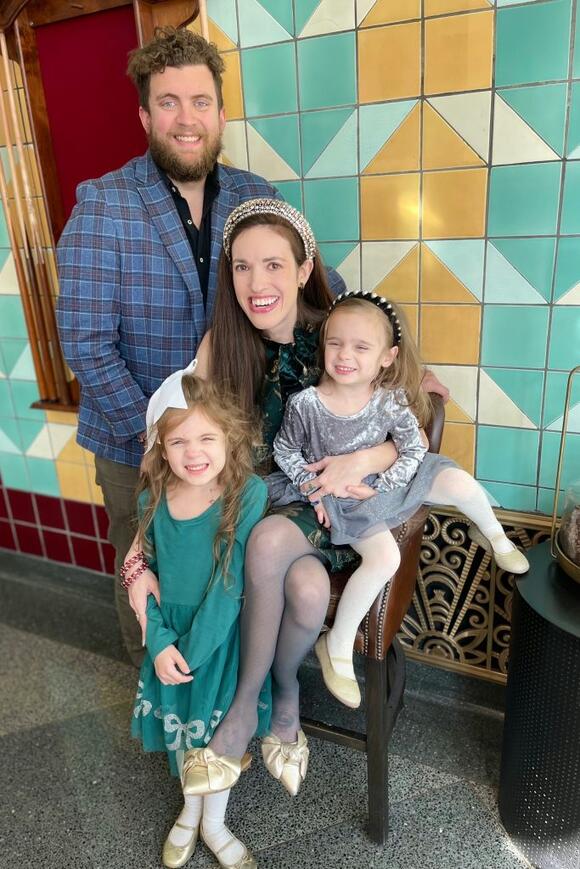 When I started thinking about elegant locations that are typically available to the public, several downtown Indianapolis hotels immediately came to mind. As it turns out, a hotel lobby is a perfect background for Christmas card photos!

Many of them are even decorated for the season by early November.

We ended up at Massachusetts Avenue's darling, Bottleworks Hotel, for this year's Christmas card photos, and I couldn't be happier with how they turned out. 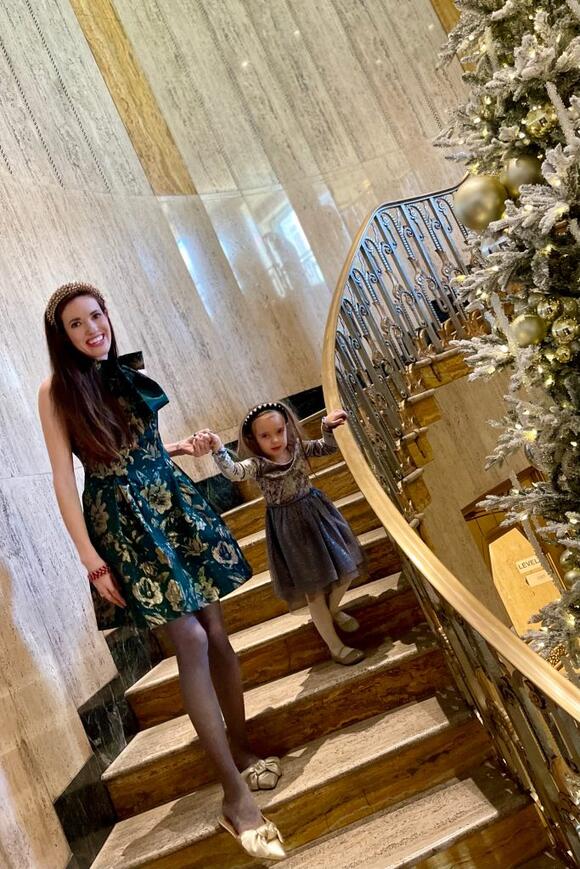 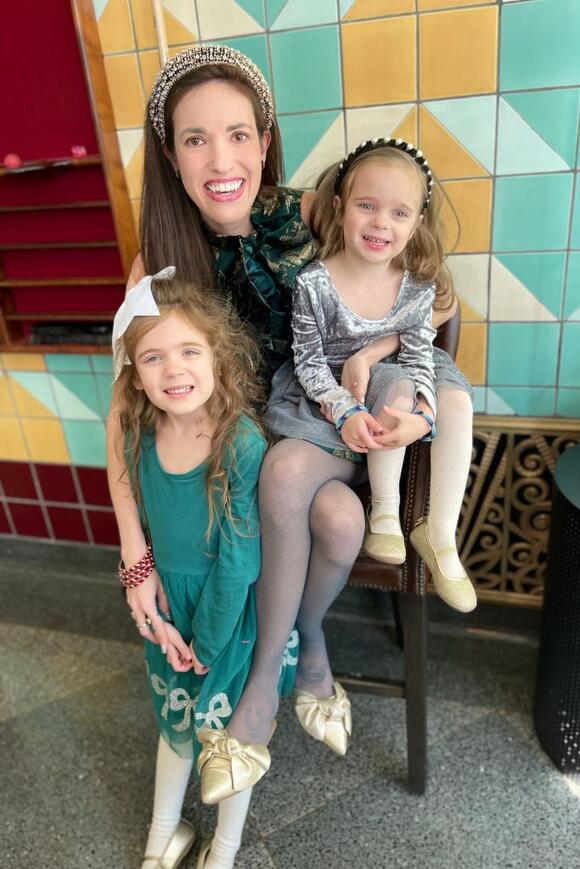 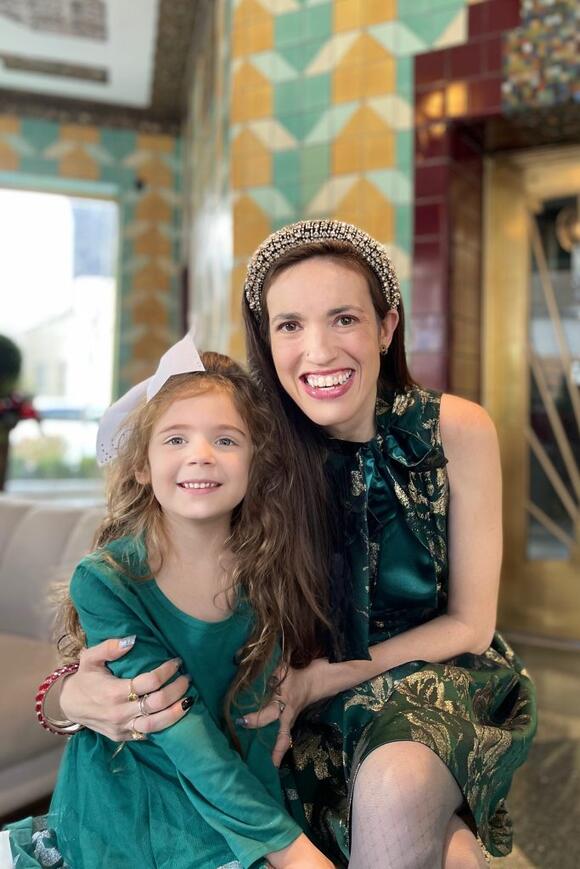 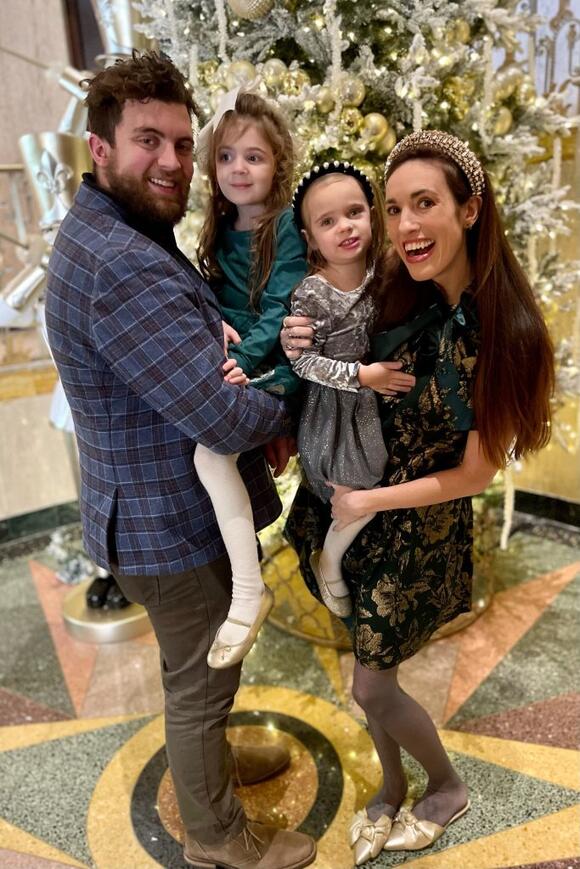 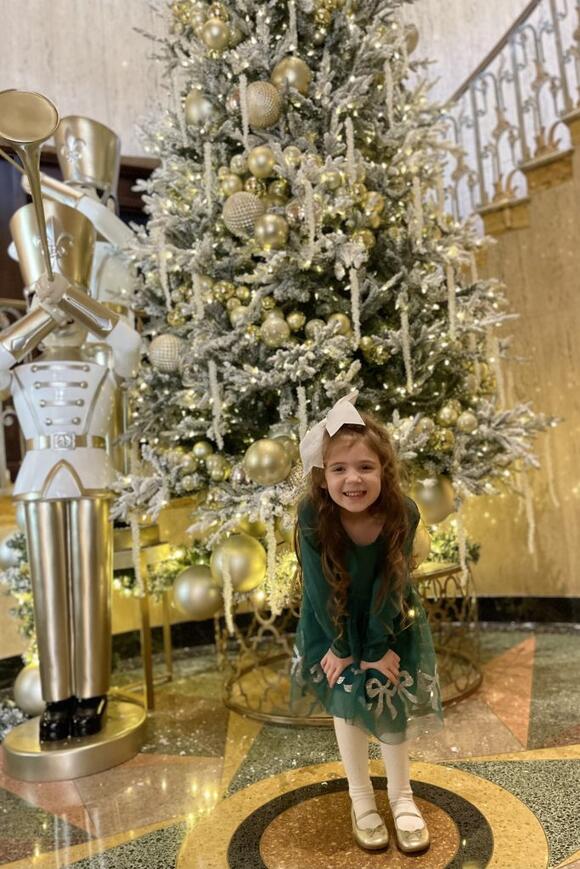 Upscale hotel lobbies typically offer high-end furnishings, well-though-out interior design, and gorgeous artwork. As history lovers, Bottleworks -- which is also one of Indy's best all-around hotels -- was the perfect fit for us.

We used several different locations in the public section of the property, including a stunning spiral staircase, a Christmas tree, and the billiards area.

And, remember, don't be afraid to try something you weren't planning -- I had my girls sit on a luggage cart on a whim, and they're my favorite photos from the entire batch! 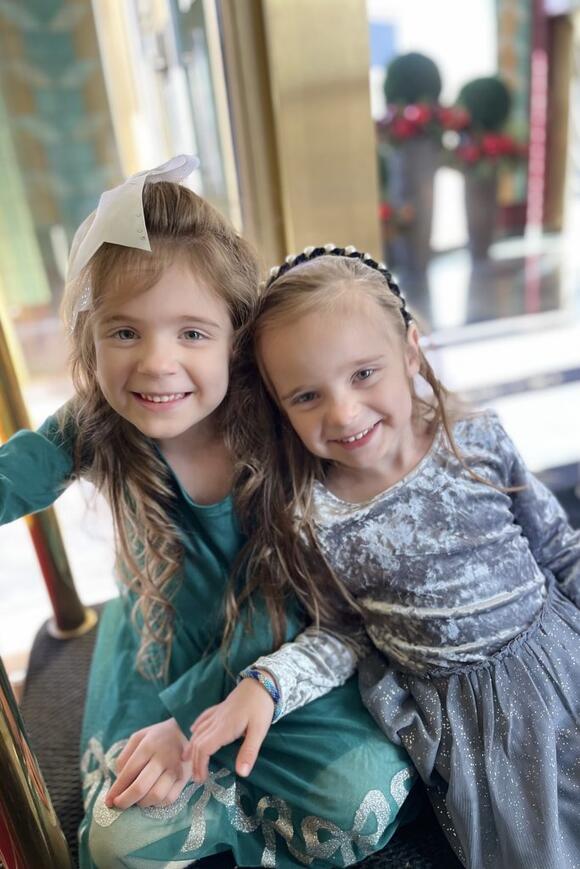 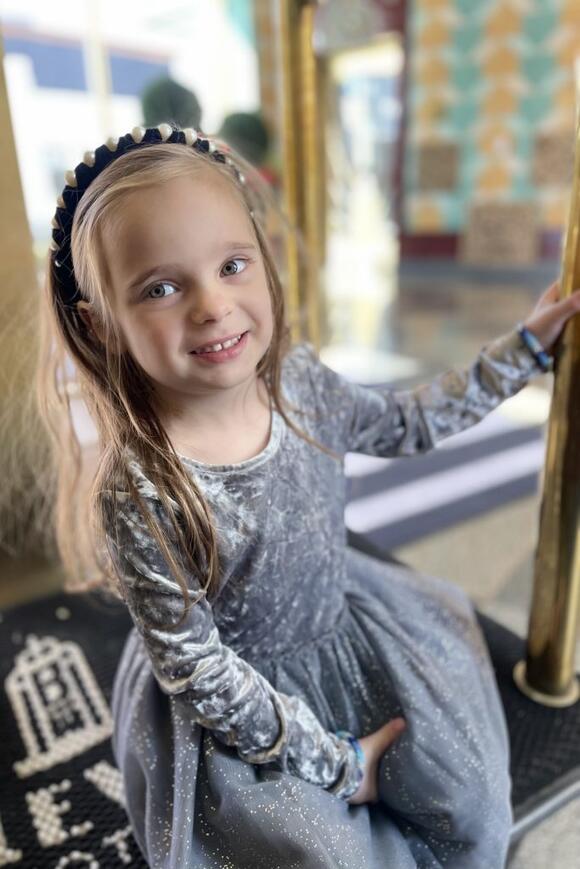 It's also important to note that you should give any hotel you plan to visit a heads-up before you arrive. Some properties have rules about photoshoots. In the case of Bottleworks, as long as professional photography equipment isn't used, taking photographs is no problem.

We used my iPhone 13 and had no issues. Happy photo taking!

More on the Indianapolis Bottleworks District

The Bottleworks District is more than a hotel, it's an entire neighborhood with great dining and entertainment. From Pins Mechanical Company to Drybar to Living Room Theaters to The Fountain Room (one of my current obsessions) it's the perfect spot for a weekend away or an Indy staycation.

It's also just steps from all the bars and shopping on the iconic Mass. Ave. 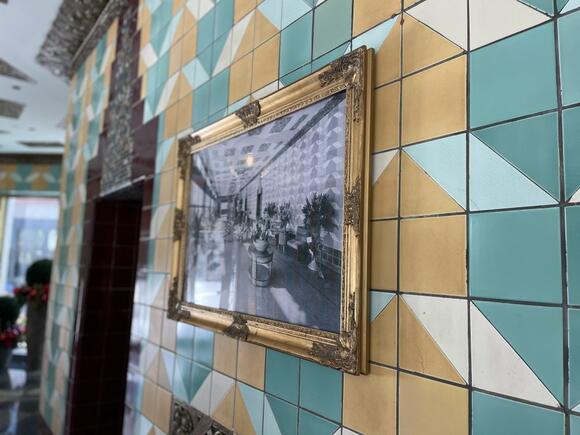 A brief history of the district notes that the original building -- now Bottleworks Hotel -- was owned by Lee E. and James S. Yuncker. Grounded in American tradition, it was the Coca-Cola Bottling Company of Indianapolis. In 1940, the Yunkers celebrated their 25th anniversary as bottlers of Coca-Cola Indianapolis and announced an expansion of the factory.

In 1949, the main addition to the plant made it the largest Coca-Cola bottling plant in the world. Local architectural firm, Rubush and Hunter, designed the plant in the Art Deco style that was popular when it was originally constructed. 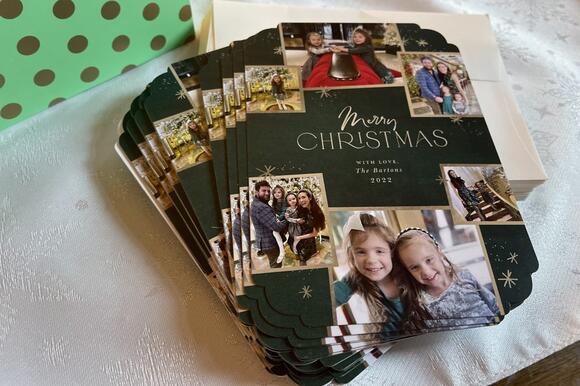 In 1969, the plant was sold to Indianapolis Public Schools when a new plant was opened in Speedway, Indiana. Beginning in 1971, the building housed the IPS Service Center. Hendricks Commercial Properties began repurposing the area in 2017, resulting in the fabulous district it has become.

Which hotel in your area would be perfect for your next Christmas card photo setting?

Rebekah is a long-time digital media professional who has branched out into creating lifestyle content of her own. From 5-star hotel reviews to everyday style, you'll find it here. Follow daily adventures at www.instagram.com/_rebekahbarton

Indianapolis, IN1 day ago

Step Inside Indy's Only Password-Protected Speakeasy

In the 1920s and 1930s, Indianapolis played stomping grounds for a number of notorious gangsters -- most famouslyJohn Dillinger -- and the city is now home to numerous speakeasy-inspired establishments.

Delmonico's NYC is an institution more than a restaurant. The first true restaurant in the city, the Delmonico brothers opened their establishment in 1837. Since then, it has served over a dozen United States Presidents, Frank Sinatra, Elvis Presley, Oscar Wilde, Gypsy Rose Lee, and more than its fair share of Wall Street Tycoons.

During the COVID-19 pandemic, Walt Disney World Resort closed for an unprecedented period of time between March and July 2020. Upon reopening, theme park Guests saw numerous operational changes, including face mask requirements and the eradication of daily housekeeping at onsite hotels.

Visit One of the Best French Restaurants In the U.S. In Indianapolis

I love Paris. It's no surprise if you know me. I took nine years of French throughout junior high, high school, and college, and Coco Chanel has been one of my style icons practically since I was old enough to walk.

Walt Disney World Resort's 50th anniversary celebration officially began on October 1, 2021, 50 years from the day of the opening of Magic Kingdom Park in 1971. For the past year and a half, Disney fans have celebrated 50 years of magic at all four Disney World theme parks -- Magic Kingdom, EPCOT, Disney's Animal Kingdom, and Disney's Hollywood Studios -- but the event officially ends on March 31, 2023, so now is the time to grab souvenirs while they are still available.

Walt Disney World Resort has been warning Guests to prepare for upcoming work on the Disney Skyliner transportation system, scheduled for January 22-29, 2023. Now, however, all mention of the closure has been suddenly removed from the official Skyliner webpage. It is worth noting that closure details remain on individual resort hotel and theme park pages.

Now that Bob Iger is once again Chief Executive Officer of The Walt Disney Company, theme park fans have been hopeful that certain Bob Chapek-era changes will be reversed at Walt Disney World Resort in Orlando, Florida and Disneyland Resort in Anaheim, California.

"Take a Seat In History" at The Fountain Room Supper Club

There's nothing I love more than a night out, except maybe a night out that makes me feel like I've magically traveled back 100 years to the 1920s. Fortunately, thanks to the wildly under-appreciated Art Deco scene inIndianapolis, there's no shortage of fabulous options when you're craving a vintage-inspired evening on the town in Central Indiana.

In a shocking move on November 20, 2022, then-Walt Disney Company CEO Bob Chapek -- who had been maligned by fans of the entertainment giant since taking over in March 2020 -- stepped down from his post, only to be replaced by former CEO Bob Iger.

As of yesterday, January 10, 2023, Walt Disney World Resort has brought back a popular ticket deal for Florida residents. Orlando's Spectrum News 13 noted that the offer costs $175 for two days in the Parks, $195 for three days, and $215 for four days. It’s valid for theme park visits to EPCOT, Magic Kingdom, Disney's Animal Kingdom, and Disney's Hollywood Studios on weekdays through April 27.

Disney Confirms Return Date For Fan-Favorite Happily Ever After

When Walt Disney World Resort announced that it would be pulling its fan-favorite Magic Kingdom fireworks show, Happily Ever After, in favor of a new 50th Anniversary show, many Park-goers were disappointed.

Be Part of the Revival of Indy's Union Station

Indianapolis is home to the first union station in the world. The original building opened on September 20, 1853, with a larger Richardsonian Romanesque station designed by Pittsburgh architect Thomas Rodd opening in September 1888.

When you think of beachfront hotels in Southern California, establishments likeVEA Newport Beach probably come to mind. VEA, with its California-cool aesthetic, is the quintessential SoCal escape.

Despite being sick all week, we recovered enough by last night to enjoy New Year's Eve at one of Indy's newest venues, Nevermore -- more on that later this week -- but today, it's back to our regularly scheduled programming.

Meet Sarah Flint, the Louboutin Competitor You Might Not Know

Our entire household has been struck down by Influenza A this week -- Merry Christmas to us -- so I thought we could all use a little luxury in our lives today. Plus, who doesn't want to put their best foot forward heading into the New Year?

Since last week'sGrinch Hot Chocolate was a big hit, the girls and I decided to ride out Winter Storm Elliott in the kitchen creating another kid-friendly holiday drink. Lilly suggested something inspired by The Sugar Plum Fairy. The Nutcracker is one of my favorite Christmas traditions -- both the 1892 Tchaikovsky ballet and Disney's The Nutcracker and the Four Realms (2018) -- so we ran with her idea and created a pretty purple libation fit for princesses of all ages.

For those of you who follow my travels because of my time in the Disney space, you're in for a treat with today's post. There's a full dose of Disney magic in store.

Get Swept Off Your Feet By This Newport Beach Steakhouse

Although a piece of my heart will permanently reside in Manhattan, and I physically reside in Indiana, I find myself on the West Coast every few months for one reason or another.

My oldest daughter, Lilly, has recently developed an obsession with How the Grinch Stole Christmas. Somehow, she'd never seen the movie before this year -- I've clearly failed as a parent in that regard -- and it's been all Grinch all the time since she discovered Who-Ville.

Help & Hope For When Depression Isn't "Supposed" to Happen