Nate Johnson is a Real Estate Investment Expert at NeighborWho, a leading property search site whose mission is to help people find in-depth information about properties and property owners in order to find new investment opportunities.

8 Things to Know About Living in Cold-Weather States 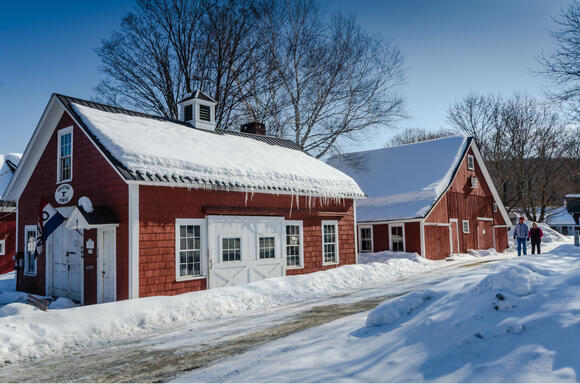 The coldest states in the US are Alaska, North Dakota, Maine, Minnesota, Wyoming, Montana, Vermont, New Hampshire, Wisconsin and Idaho, according to a century of average temperature data from the National Centers for Environmental Information.

If you’re thinking about moving to any of these cold-weather states, it might be a big adjustment if you’re coming from a warmer climate like Florida or Texas. Even if you’re moving to a state that’s only moderately colder than what you’re used to, you and your children could find yourself overwhelmed if you’re not used to dealing with snow or freezing temperatures in the wintertime.

To help prepare you for a move to a colder climate, we’ve rounded up some things to know before moving to a cold-weather state.

1. Your home will need cold weather protection to avoid issues like freezing pipes

If you’re moving somewhere with a lot of snow or ice storms, water damage is going to be a regular concern. A leak detector can help notify you in the event of freezing pipes or water leakage, but it won’t prevent water damage that occurs as a result of things like roof leaks caused by ice dams or pools of water on the floor from tracked-in snow. You’ll need to carefully monitor your home for any signs of water damage or mold.

2. You’ll need to prepare your vehicles for freezing cold temperatures

Cold weather can have a serious impact on an automobile. According to Car and Driver, electric vehicles get less range because it takes more energy to keep the battery going strong, tires may deflate as the cold air loses pressure, and the oil in your car may thicken up as it gets colder. These are just a few of the ways cold weather can put strain on a vehicle.

When living in a cold state, it’s wise to keep an emergency kit in your car containing items like an air compressor, a windshield ice scraper, ice melt or rock salt, and jumper cables. You might want to use a thinner oil if your car can handle it, as well as keep it tucked under a car cover during snow storms.

3. It can be a big job to maintain your property after a snow storm

If you’ve never lived in a state with a lot of snow, it might be hard to imagine how much extra work it involves. Snow may look beautiful when it’s first coming down and right after a storm, but for many people, the novelty wears off fast. After a storm that leaves at least a few inches of snow on the ground, you’ll have a whole list of chores to complete: shovel your driveway and walkways, clean off your cars, clear snow from your outdoor equipment like your HVAC unit, check your gutters and corners of your home for ice dams, remove any hanging icicles and salt areas where people can slip.

When you move to a state where it snows frequently during the wintertime, the community is accustomed to dealing with snow. This means they might not close schools and businesses for a storm, and everything might be business as usual. This is very different in warmer cities and states where it rarely snows, as a minor storm could close schools for days. This is because colder states have systems in place for salting roads, and citizens are used to driving in that type of weather.

Similarly, when traveling from a nearby airport or exploring a cold weather city, you may find less cold weather-related delays at local airports in cold weather states. If you do end up stuck while traveling, consider storing your luggage at the airport while you rest or seek shelter.

5. Driving in snow requires a different set of skills

You’ll need to know how to safely drive in the snow, which means doing things like making sure your tires have good tread and pressure, your wiper blades are in good condition, your wiper fluid is rated for freezing weather and that you have enough gas to avoid freezing in your gas line. You should also study up on snow and ice driving tips, and practice driving in the snow in an empty parking lot if possible.

6. There’s a right and wrong way to layer clothing

When layering clothing for extremely cold temperatures or snow storms, you should use three layers: a base layer, a mid layer, and an outer layer. According to Dick’s Sporting Goods, a base layer should be thin and made of a material that can absorb moisture. The middle layer should add warmth without being too thick—something like fleece, flannel or cotton. The outer shell layer is your thicker layer, and it should be water-proof or water-resistant.

You don’t want to wear anything that’s extremely tight-fitting, especially on your feet. If you put three pairs of socks on your feet in an effort to keep them warm, this ends up having the opposite effect because it reduces circulation. A pair of good, waterproof snow boots with just one pair of socks should do the trick.

According to Entergy, heating and cooling costs often take up more than half of an energy bill. The more variance there is between the temperature outdoors and your desired indoor temperature, the harder your HVAC system has to work to get your home to your desired temperature.

If you’re moving to a state where temperatures regularly drop to freezing or below, your heating bill might add up quite a bit. If you take measures to improve your home’s energy efficiency, this can help reduce your monthly cost. It may also be worthwhile to install a heat pump.

8. You might encounter different wildlife than you’re used to

Depending on where you live, the wildlife you encounter in your backyard can range from squirrels to snakes to foxes to frogs. Many cold-weather states rank high in terms of their bear population. In North Dakota, one of the coldest states, you might encounter moose or buffalo. Some cold-weather states have coyotes, caribou and wolves too.

9. Pets will need to adapt to the climate

If you have a pet who likes to go outside a lot, your furry friend might not be able to spend as much time in the backyard in freezing temperatures. This might frustrate pets who want to follow a routine that involves spending a lot of time outdoors. Smaller dogs or dogs with short hair may need to wear a sweater to protect them if they’re going out for a walk in extreme temperatures.Booties may also be advisable to protect paws from snow, ice and salt.

Nate Johnson is a Real Estate Investment Expert at NeighborWho, a leading property search site whose mission is to help people find in-depth information about properties and property owners in order to find new investment opportunities.

Picking the perfect neighborhood to live

Young woman walking dog in modern residential houses neighborhood street in Bentonville, Northwest Arkansas(shutterstock/shuttersv) Choosing a new home is an experience that can be both exciting and scary. Aside from the financial considerations you should make when choosing a new neighborhood to live in or to invest in, many other factors can play into picking the perfect neighborhood when renting, buying, or investing in a new home.

6 Things to Know About Moving to Portland

Iconic Portland, Oregon Old Town sign with an outline of Oregon and a stag(shutterstock/Jess Kraft) Portland, a vibrant city in America’s Pacific Northwest, is referred to as "weird" for many reasons. From strip clubs to the smallest museum in the world, Portland's weirdness has endeared it to its residents. The largest city in Oregon state is also famed for its overwhelming natural beauty of green space, forests, and breathtaking mountaintops.

Protecting Your Home From Wildfires

(Shutterstock/David A Litman) As global temperatures continue to increase because of human-induced climate change, the weather becomes more severe and harder to predict. According to the National Oceanic and Atmospheric Administration, weather events leading to more than $1 billion in damage, a key indicator of a changing climate, are on the rise in the United States.

As the real estate market cools, don't overlook these things when buying a house

Buying a home is a major decision and a huge life milestone. It’s the largest purchase most people ever make, with the Census Bureau reporting the median sale price of new houses reaching $436,700 as of March 2022. If you’re thinking about buying something that costs hundreds of thousands of dollars, do your research and consider every possible factor pertaining to your investment. Even if you have a licensed real estate agent assisting you during the process, you should know the ins and outs of the process because it’s your money, your home and your investment.

10 Things to Know About Living on the East Coast

(Gualberto Becerra/Shutterstock) In the United States, the East Coast is considered a highly attractive place to live for job opportunities, diversity, weather and some other benefits, such as a fast-paced lifestyle.

Selling Your House? Don't Overlook These 5 Things Before You List

For many people, a home purchase is the largest purchase they’ll ever make, so selling a home can be one of the best ways to get a large lump sum of cash. The process of selling a home is incredibly stressful, though, and it demands a lot of time and energy.

The coronavirus pandemic saw many real estate markets leap upward. Some saw home prices jump over 40% in a single year!. Pick your reason as to why. People spending more time at home are focused more on their home, and usually wish they had more space. Many homeowners took on home improvement projects. The sudden collapse and meteoric recovery of the stock market left many investors seeking firmer assets — particularly as a hedge against inflation in the face of record government spending and new currency creation.

It’s no secret the real estate market is blazing hot right now. The COVID-19 pandemic has brought on many economic challenges. One has been keeping up with the demand for housing.

Top Things to Do in Denver in the Spring

As the winter months tick away, the weather warms and the days get longer, the city of Denver comes back to life. A fun place to live and visit year-round, Denver has a lot going on in the springtime. Here are some of the top things to do in the Mile High City:

Top Things to Do in Miami in the Spring

While Miami is a great place to live and visit all year round, springtime here is the best. The cooler winter weather hangs on (Miami in the summer is an all-around scorcher), and there’s just so much to do.