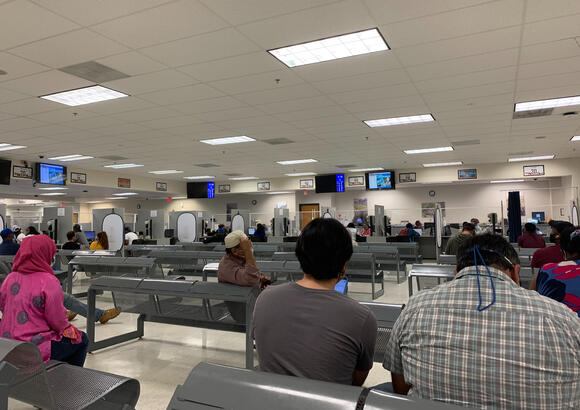 I recently moved from Kentucky to Maryland. It's very hard to beat the Kentucky DMV experience because Kentucky didn't have DMVs while I was a resident.

Instead, I went to the county clerk for all my license and registration-related needs. When I transferred my license from Connecticut to Kentucky, there was no one in line ahead of me, and I was done in under thirty minutes! However, getting a title transferred was a bit trickier as some locations don't do it, and that visit took me almost an hour, after getting sent home for the wrong paperwork previously.

I was extremely lucky to have my boyfriend come with me to the Maryland DMV. When we arrived, there was a line out the door. There had to be a hundred people in that line, and we all had appointments. Many people brought their family members to stand with them in the line. It felt like a long wait, but it really wasn't. I'd estimate we were outside the building for about a half-hour, and I had an afternoon appointment on a Friday.

However, my boyfriend previously had a Friday afternoon appointment at the same DMV and the line was nearly non-existent, so I suppose it really depends on the time of the month.

Once inside, I was given a ticket and seated in the waiting area. My boyfriend was allowed to sit with me, which was nice, and many other people also had their guests come inside with them. I saw a few parents helping their kids at the station windows, too.

I sat for about forty-five minutes before being called to my station. The attendant was pleasant, efficient, and got my license paperwork done in twenty minutes. I was then given my number slip back and sent to the other side of the room to await being re-called to do my title and registration.

This wait was much shorter, approximately ten minutes, and my attendant was far nicer. I think this side of the DMV doesn't get as many customers, but that's just a guess. For my title and registration, it took less than ten minutes in total. I don't know about your previous DMV experiences, but that's an incredibly short amount of time!

The Maryland DMV was pretty painless! The worst part was waiting outside in the sun, even though I had an appointment. Compared to Kentucky, the waits were the worst part. We lived in a pretty rural part of the state. Once I got through all the waiting periods today, the attendants who helped me with my paperwork were very speedy, far faster than the DMV equivalent in Kentucky and Connecticut, for that matter.

The Baltimore location has plenty of staff (and security officers) to make sure everything runs smoothly. I highly recommend this location. Remember to bring more paperwork than you think you need. Thank you, DMV staff!