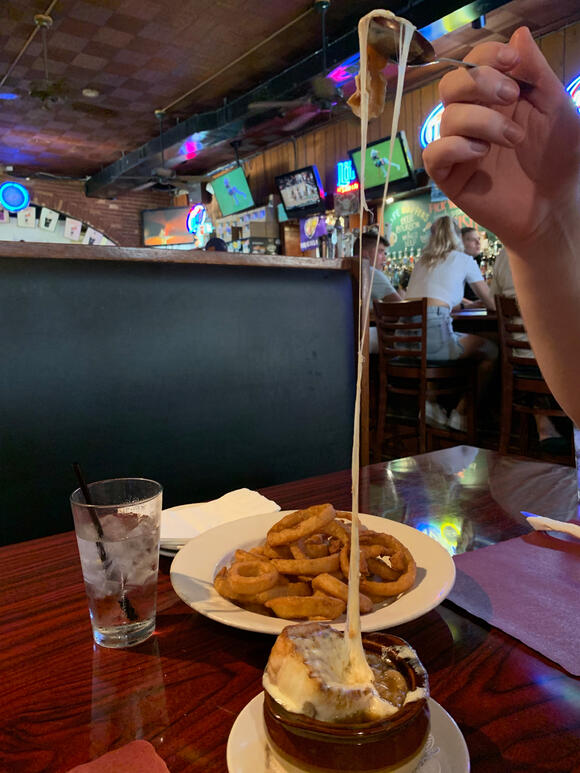 Kisling's Tavern is a local favorite in Baltimore. In recent years, they've won awards including "Best Wings in Baltimore" (Baltimore Magazine 2018, 2017, 2014, 2012) and "Best Chicken Wings in Maryland" (Big 7 Travel 2020 and 2019). Including other titles won in previous years, their restaurant has 18 claims to fame. Because of this, we really wanted to come here and try their wings and eat dinner.

Our Orders and Favorite Items

I have to say, my favorite item on their menu is their French Onion soup ($5.99). The cheese pull was amazing! The soup has a huge chunk of bread instead of tiny soggy pieces, and it's drenched in melted cheese. The soup is very salty, but on-point for French Onion. I would go to Kisling's just for the soup.

We also ordered a platter of onion rings ($9.99). These are battered onion rings, which are far superior to bread crumb rings. We thought they were very crispy and cooked well. However, we were surprised the onion rings didn't come with any dipping sauce. They are a very dry item and we were shocked. Luckily, we ordered our own for the chicken and we double-dipped in that.

If you're familiar with Kisling's, the boneless wings we mentioned wanting might have confused you. You're right; they don't offer boneless wings. Instead, they offer "Dipped Tenders" ($11.99), which are chicken tenders dipped in whatever wing sauce you would like. We didn't want to only try one sauce, so we opted for plain chicken tenders and then ordered five sauces to dip in ourselves.

We opted for the original award-winning buffalo wing sauce, Chipotle BBQ, Honey Old Bay, Sweet Chili Pepper, and General Tso's sauces. Each extra sauce will cost you $1.50, but the sauce containers are very large. Our favorite sauce was the Honey Old Bay, and that's saying something as we are very new to Maryland. Old Bay isn't our favorite seasoning yet, but with the honey, it was a perfect combination.

Sweet Chili and General Tso's were close in second and third for me, and my partner liked the Chipotle BBQ a lot. Neither of us liked the award-winning buffalo wing sauce. It tasted strongly of blue cheese, which neither of us was expecting nor wanted.

The tenders themselves weren't anything special and were tenderized to almost being pancakes.

This place has the makings of a great wing place. They've clearly won the awards for it, but we were shocked they didn't offer boneless wings. It seems like a given for a place whose claim to fame is wings. The chicken tenders were a very sad substitute.

If we go back in the future, I'll be getting the French Onion soup and the onion rings, along with a thing of Honey Old Bay sauce. Those were the standout items for me. I'd like to try their "real" wings as well, but my partner only eats boneless.

The Kisling's Tavern gives off old-time feels, and it gets a little musty in there. It's fine for a quick bite, but I'm not sure it'd become a regular spot for us. Still, I'd recommend coming here purely to have the French Onion soup and buy some of their sauces to try.