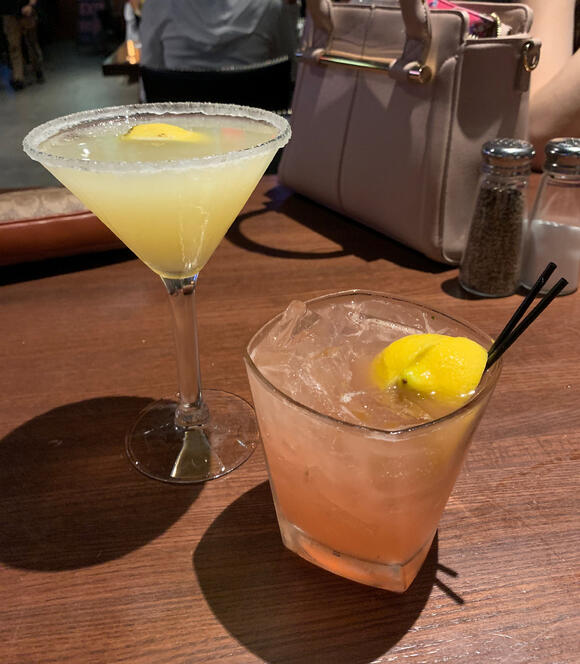 While visiting Massachusetts a few weeks ago, my boyfriend and I met up with an old friend of his for dinner. We opted to go to Bar Louie at Patriot's Place in Foxborough. Right away, we noticed how packed the restaurant was. From where we were seated, I counted 75 diners, and we could only see a third of the restaurant. The front was equally packed, and I couldn't easily see into the other section.

For our drinks, we decided on a lemon drop and the lone star lemonade. The lemon drop was as strong as expected and was decent. The lone star lemonade was amazing. I could've drunk another four of those if I could handle it. It was one of the best drinks I've ever had. Our friend stuck with an iced coffee, which she said wasn't very good. We found it a bit funny that of the eight creams they gave her, all of them were past their sell-by date. She said they tasted fine.

For our meals, we all decided to get tacos. I got shrimp tacos, which are no longer available. I thought they were good, but they weren't anything special. I wouldn't get them again. My boyfriend got the chipotle chicken tacos ($10.50) and thought the same thing. He said his salsa was the best part of his meal. He also got a chewy piece of chicken in one of his tacos and that really ruined them for him. Our friend got the impossible tacos ($11.50) and thought they were fine.

Our waiter was very nice but was clearly being overworked. She forgot all of the extras we ordered, such as avocado cream and sour cream, and we had no napkins. It was very hard to flag her down in such a crowded place. Along with full tables on all sides of the restaurant, they had a full bar right in the middle. There were some empty tables, but they didn't stay empty for very long. We were eating late at night and many of the other restaurants at Patriot's Place were closed, so it's likely this was the best open option in many people's eyes.

I would definitely go back to Bar Louie for their drinks. They have a large cocktail menu, and the two drinks we ordered were both fabulous. They also have a food truck on the roof that I'd love to visit sometime when it's available. It was closed for the night.

The tacos were decent. None of us thought they were bad, but they weren't stand-out tacos. We didn't think they were worth over $10. I really think this place succeeds as a drinks bar, but as a restaurant, they aren't anything special. It's meant to be bar food, and that's what you get. We weren't expecting anything different, but we were a little bothered by how slow the service was because our waiter was being overexerted by the huge crowd.