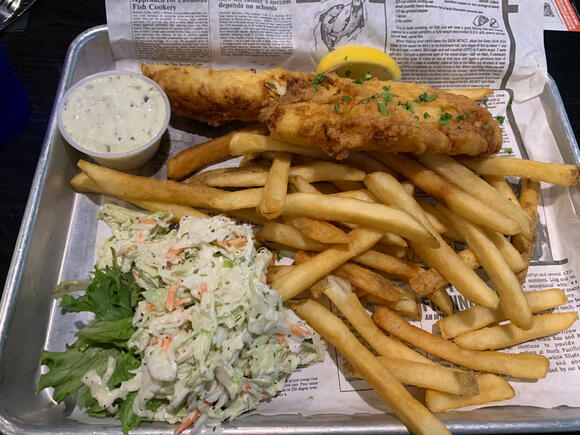 Barrett's Alehouse is a very popular restaurant with locations in West Bridgewater, Bridgewater, and Fall River. My boyfriend decided to treat me to a meal here in West Bridgewater as a celebration after winning a new freelancing client. It is a bit of a pricey place, but even if I was paying I would've been glad to spend my money here. We had a great time eating delicious food and our waiter was amazing.

The place itself is gigantic. It's basically a sports bar that is the size of three typical restaurants put together, and that's not including the outside section! There must have been at least twenty televisions mounted around the restaurant. It was a bit distracting, honestly.

The place was quite packed, with a line of people waiting to be seated the entire time we were there. They weren't waiting to get in that entire time mind you, but rather the place kept getting new customers so quickly that the queue never was fully empty. Considering they had at least seventy tables inside and maybe fifteen waiters, they were doing incredibly well.

For the main course, my boyfriend got the Texas burger ($15). He liked it but was unable to finish. It was a very meat-heavy burger. The fries were great and the pickle was your average pickle. I thought the burger was decent, but I've definetely had better burgers.

My fish and chips ($18) were gigantic. I saw a guy a few tables over had one even bigger than mine, so I do think they try to cater their fish choice by the customer. Mine fish was way too much for me to eat, but I sure enjoyed trying. It was cooked perfectly, the breading was very crispy, and the tater sauce was perfect. Our waiter was hilarious and very attentive. He made sure I had plenty of tater sauce, refilled our drinks multiple times, and overall really had a great personality. I think we gave him our best tip of the trip.

After we finished eating, we went to the game room, which is near the restrooms at the left end of the restaurant. It's a huge arcade with ski ball, basketball shooting, and your typical ticket games. There's a prize counter too if you collect enough tickets. We spent a good hour here playing games after eating and spent around $25 on an arcade card, which we didn't finish off. I think you could get away with $15 for a good half hour of fun for two people, but if you have kids it's going to be pricier.

Overall we had a fantastic time here. The food was great. You can view their menu here. I was so happy with the seafood quality, and our soups were super yummy. Our waiter was one of the best waiters we've had. The arcade was a great way to wrap up our afternoon. We will definitely come back here in the future!