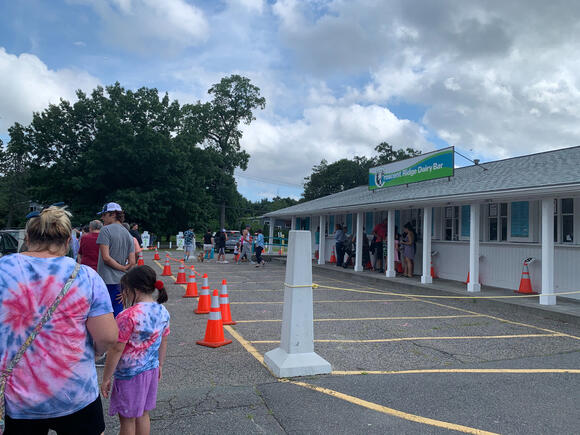 Crescent Ridge Dairy is a pretty famous ice cream stop in Massachusetts. They've been named twice as one of the 10 Best Ice Creams in the World by National Geographic, and Men's Journal named them among the 27 Best Ice Cream Shops in America back in 2014. After hearing about the hype and my boyfriend constantly telling me how amazing the ice cream was, we finally went. It was certainly an experience!

The first thing to know is this place is it's good and everyone knows it. When we hopped in the line, it was about thirty people deep. We waited in line for about a half hour. By the time we left, there had to be at least seventy people in that line. As we returned to the car, a woman still in her vehicle in the parking lot asked us how bad it was, and I think she left after we told her!

Crescent Ridge Dairy does have bright flyers posted throughout the waiting area so you can fully plan your order before arriving at one of the many open ordering windows. I ended up getting a rootbeer float, also referred to as a Black Cow. It was delicious, and one of the first rootbeer floats I've finished the ice cream from after running out of root beer. My boyfriend got a "kiddie"-sized ice cream dish ($5.65), and two kiddie-sized for his grandparents.

Look at the size of those dishes! Can you imagine what a large looks like? Thank goodness we didn't order anything bigger. His grandparents knew what they were doing. Next time I'll be going for the "tiny tot" size! Everyone was very happy with their ice cream flavors. It is a pricier ice cream shop, but as this place has their own land, cows, and extremely high ice cream standards, it's worth paying a little extra.

If you want to save a bit of money and beat the line, Crescent Ridge Dairy has a small grocery store attached to their ice cream ordering windows. It has its own staff and inside you can buy gallons of their popular ice cream flavors. It's definetely the better deal.

Along with delicious ice cream, the shop also sells milk, cheese, eggs, cakes, meat and seafood, pantry, and other bakery items. They have many vetted local partners whose materials they use and whose products they sell. Crescent Farms Dairy has been distributing milk since 1932 ... they know a thing or two about farm-fresh quality.

If you're in the Sharon, Massachusetts area, I highly recommend giving this ice cream shop a try. Beat the line by buying a gallon or two in their grocery shop, or go on a chilly day and hope no one's in the mood for ice cream. They're open daily from noon to 10 PM. Ice cream (and milk) doesn't get much better than this, and trust me, I've tried a lot of ice cream over the years.