Should You Go To The Kings Island Grand Carnival Event in Mason, Ohio? 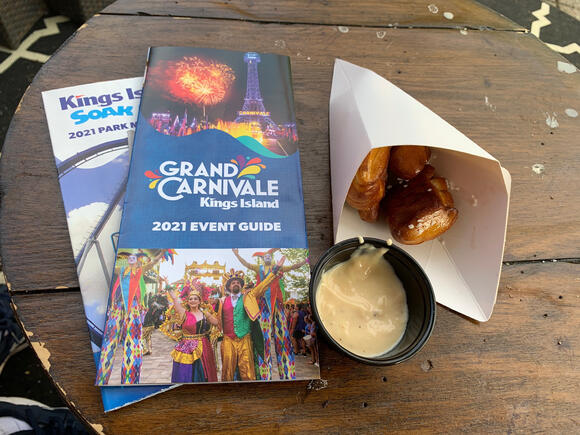 Recently my partner and I went to Kings Island for their Grand Carnival event. The event is being held from 5 PM - park close daily and your last chance to visit is August 1st. As my partner is a gold pass holder, he was able to go for free, and I purchased a guest pass at a reduced rate using his pass for $39.99. We met up with two of our friends there who are also gold pass holders. If you go to Kings Island at least three times per year, the gold pass is worth it at a price point of $130.

My partner and I also shelled out for a Grand Carnival tasting card for $45.00, which would allow us to try nine different dishes at the event.

When we got to the park on a Thursday evening, it was pretty packed. We were surprised considering it was a weeknight, but apparently, everyone else had the same idea. Lines to get on rides took about fifteen to thirty minutes on average for us.

The main reason we attended the festival was that it is marketed as a food event. When you purchase the tasting card, you receive a map of where all the different countries' tasting booths are. Your food options included foods from China, France, Germany, India, Italy, and Spain, not to mention the booths and restaurants normally in the park.

Our first food item was the pretzel bites from Germany, and it was one of the best food items in the park, which is saying something. The pretzels were delicious, but we struggled to find other snacks we liked. The menu had plenty of great-looking options, but they were either sold out or very greasy.

Considering the event started at 5 PM and we ordered our food at 5:45 PM, we were shocked that the German booth had already run out of German Sausage and Kraut balls. We also saw a health inspector next to the booth while the kitchen was running, which made me think the event was rather quickly brought together.

The Spain booth had their act together, and the food was yummy. We enjoyed the Pollo al Ajillo, churros, and potatoes bravas. The French booth took our order and forgot about it for ten minutes while we stood nearby and no one else was in line. The crepes were soggy and had too much lemon. The fried rice and eggrolls at the China booth gave me a stomach ache, but we liked the dumplings.

We did enjoy watching the parade prance through the walkways of the park. The decorations and costumes were very extravagant. However, it was hot outside, and we could tell many of the performers were not happy to be there. In contrast, we could see which performers took their theatrical careers seriously and every twenty cast members or so you'd see someone having the time of their lives. It was pretty entertaining to look at everyone's mood, but I do think the staff was tired.

Overall, we were happy we went, but the food was a pretty big miss. The parade was a nice feature and we got to ride four rides and see the 10 PM fireworks, which were pretty spectacular. I think the event wasn't as good as it could have been. We left feeling disappointed, but we were glad we at least tried it out.

I think it's worth going, but I wouldn't recommend purchasing the event food pass. Instead, buy a few snacks that look interesting or stick to the normal food attractions. Enjoy the parade and collect the carnival beads thrown around the park.