Board Game Rentals in Northern Kentucky 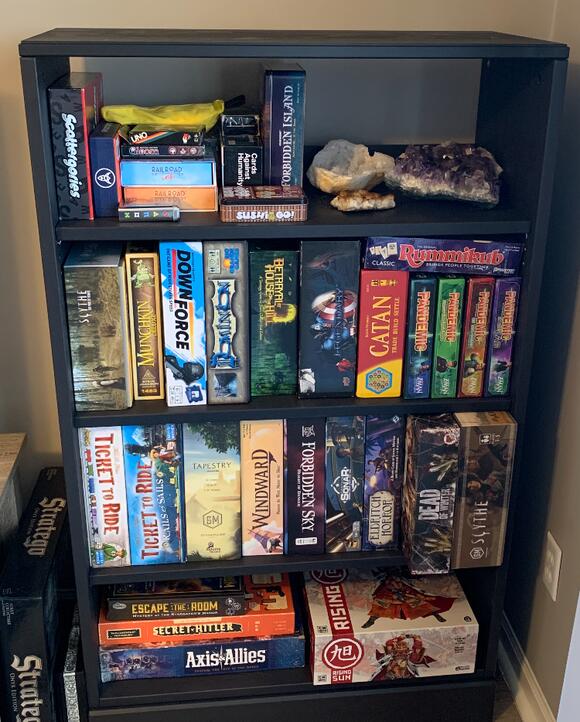 We're all bored at some point during this pandemic, there's no way around it. Even if you have the most exciting job or hobby on the planet, you find yourself with more free time than ever before, whether you want it or not.

As board game aficionados, my boyfriend & I like to support local game stores. Our favorite place is Play It Today Games in Erlanger, KY. The store is decently sized, with tables out for groups to meet and play board games. They have a wide variety of games available to purchase.

The really interesting part about this store is that they have membership plans. You can rent board games instead of purchasing them, pay to play them in-store, and get discounts when purchasing any games that have already been opened. It's a great system for someone who doesn't want to spend money without trying out a game first. It seems to be working out well for them.

We first stumbled across the shop when it was at a different location. My boyfriend had been looking for a specific version of a game called "Railroad Ink - Blazing Red Edition" for months and had just about given up. He actually ordered the Spanish version of it off Amazon and intended to learn a bit of Spanish solely to be able to play it, such was his desperation. It was not available at Play It Today Games, either.

However, the owner was able to order the game for us, and it ended up being cheaper than the Spanish version my boyfriend bought online. No other game shops were willing to place orders, whether this was because they worried about not being able to sell it or didn't have the purchasing connections, I am unsure. Regardless, Play It Today Games will have our business for as long as we live here because of the owner's willingness to go above and beyond.

A more recent game we purchased from him is "Tapestry". The game was already open after being played during a rental or in-store play period, so we got a nice discount on it. (All the pieces were there, for anyone wondering.) The owner seems to make it a habit of playing or researching all games he sells so he can give tips. He let us know that the game makers had actually changed a couple of rules after releasing the game, so we should look for a booklet online to improve our experience with the board game. If we had bought this game at a huge retail chain, we would never have known this.

Photo by author of another game we own called "Ticket To Ride", which is usually for sale at Play It Today Games, too

If you are in the market for some board games, I urge you to check out Play It Today Games. The owner is very friendly and knowledgeable about what games you may enjoy, and there's a large selection to try out in-store if that's something you are interested in. Board games also make great presents (especially now) and there are many fun, affordable options to choose from. We love this place.