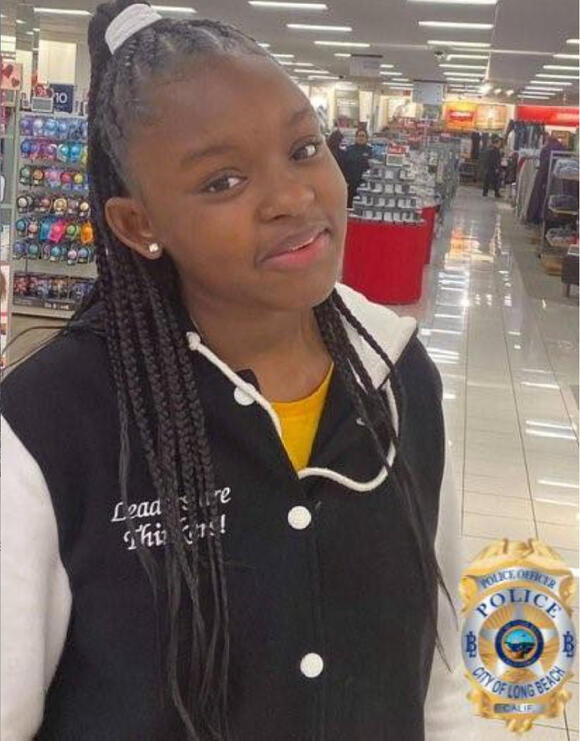 Nya Jingles is neurodivergent teen who is 15-years-old and unable to care for herself.Photo from the Find Nya Jingles Facebook Page

The family of Nya Jingles, a missing 15-year-old who is missing from the 3300 block of Atlantic Avenue is planning a virtual prayer vigil. Nya was last seen on May 5, 2022. The developmentally challenged teen has eloped before, but she was always found.

For those unfamiliar with the term, elope or elopement is a term common for children and adults who have autism spectrum disorder (ASD). It refers to an individual that has run or wandered away from caregivers or secure locations.

This is different from when a neurotypical teen runs away because the person running pretty much can’t make the connections to the ramifications and the dangers involved with doing so. To add to this heartbreaking case, Nya is without her medicine, Abilify, which she needs to take daily.

Additionally, the family reports that the police over this case is treating Nya’s elopement the same as they would a typical case with a neurotypical runaway. This is a completely inappropriate response. Police also failed to question the Uber driver that she was last seen with before being dropped off.

On the Facebook page Find Nya Jingles, her family writes

I just found out that OC sheriff/police still have not personally talked to the Uber driver they claim dropped my daughter off in Long Beach. Both my husband and I were led to believe they spoke to the driver. This further lets me know they are not doing everything possible to find my daughter.

Please call the OC sheriff and put pressure on them to do a press conference and seriously look for my daughter. I don't understand why they have not personally questioned the driver if he was the last person to see my daughter.

We need HELP!!!! Call OC sheriff and demand they do more. They have not checked all the cameras on the street she was dropped off on.

The virtual prayer vigil will be held today at 8 PM EST / 5 PM PST via zoom. If you would like to join the family in offering support please use this link. Nya was last seen wearing a blue hooded sweatshirt, light blue jeans, and black Nike Air Force Ones. Nya is an African American female who’s 5’9” and 140 lbs. She has black hair and brown eyes.

Though Nya is verbal, she is not receptive to everything a typical teen would understand. She fully believes that anyone nice to her has the best intentions for her. Furthermore, her memory is not the best. Her memory is exacerbated in any high-stress situation.

Anyone with information regarding this missing person is urged to call the LBPD Missing Persons Detail at (562) 570-7246 or Police Dispatch at (562) 435-6711. Anyone wishing to remain anonymous may submit a tip through "LA Crime Stoppers" by calling 1-800-222-TIPS (8477), downloading the "P3 Tips" app to your smartphone (available at the Apple App Store and Google Play), or visiting www.lacrimestoppers.org.

More from Quest for the Forgotten

No One is Looking for Missing Trans Woman Arrielle Dicks

This is the only picture that is produced when you search for Arrielle Dicks online.This picture is from Blotter. Arrielle Dicks is a 38-year-old transgender woman who is missing out of Philadelphia Police Department. She was last seen on the 4500 block of N. 19th Street at 4:35 p.m on Thursday, February 10. She hasn’t been seen since.

This is the missing person poster for Aubrey Dameron.This image is from the Facebook page Missing Aubrey Dameron from Grove, Oklahoma. Aubrey Dameron was 25 years old when she was last seen the morning of March 9, 2019. She left her mother’s home in Grove, Oklahoma around 3:30 am. Her family knows that she’d messaged several people to get a ride. However, it is unknown if she ever got a ride. Aubrey's phone's last ping was at 3:42 am close to her home, although it is not known whether it died or was shut off. Aubrey has not been seen or heard from since.

Nya is a critical missing teen who suffers from mental health issues.This missing person poster is from the Facebook page of the Black and Missing Foundation. The family of Nya Jingles is desperately seeking answers for their missing 14-year-old who was last reported getting dropped off by an Uber in the 3300 block of Atlantic Avenue, Long Beach on May 5, 2022.

A California native has documented her horrible treatment at Antelope Valley Medical Center in a series of tweets on Twitter. Keishya Davis, who has started a petition on Change.org, to hold the medical institution accountable, relayed her harrowing ordeal.

Kennedy is seen here with her father who goes by "Too Tall" on Facebook. He shared his gratitude for her return.Image from Too Tall's Facebook Page. 14-year-old Kennedy Isom was a teen missing out of the Silver Spring, Maryland. Her original missing person article can be found here on NewsBreak.

Kennedy Isom is a missing 14-year-old teen that was last seen by family at Montgomery Blair High School.Image from the Black and Missing Foundation. Kennedy Isom's family is desperately seeking answers for the whereabouts of the missing 14-year-old student-athlete. Kennedy was last seen when she was dropped off at school, on Friday, April 1, 2022, at approximately 12:30 p.m., in the 50 block of University Boulevard East. Her father, the owner of Too Tall's Island Grill has shared on his Facebook page,

Alicia is a missing 15-year-old from Sacramento that is possibly a trafficking victim.Image from the Black and Missing Foundation. Alicia Aaliyah Marie Bryant, 15, disappeared on March 11 and hasn’t been seen since. Bryant is missing out of the Sacramento County Sheriff’s Office, and her family is worried she could be a victim of human trafficking.

Asia Maynard is a 29-year-old mother of 4.The photo was found on Black Femicide-US Police are receiving harsh criticism for what some are saying is a rushed, bare-bones investigation regarding the death of Asia Maynard. The 29-year-old, mother of four was found dead at the home of her date Isaiah James Crown, whom she met online.

Monisha was reported as missing on February 24 with the Cedartown Police Department.This poster is from the National Center for the Missing and Endangered, Inc. Detectives are still searching for Monisha Sharae Leath, a missing woman out of Rome, Georgia, a city on the outskirts of Atlanta. The 32-year-old mother was last heard from on February 24, 2022. Jackie Leath, Monisha’s sister, says that when she tried to video chat with Monisha around 5:00 pm that same day, it was her husband that called back.

Janet is survived by her husband.Photos were from her Facebook Page. Sgt. Melvin Williams has been named as a “person of interest” in the death of Communications Officer Janet S. Jordan. The 35-year-old Rochester resident was reportedly “found deceased” earlier Monday on Wetmore Park. The Rochester Police Department is remaining tight-lipped about the cause of death. However, Bob Lonsberry, talk-show host at WHAM radio and WSYR radio advised that Janet was stabbed.

Petite 17-year-old teen, Aaliyah Talley Morris, has been missing for a month as of today.Black and Missing Foundation. Aaliyah Talley Morris is a 17-year-old who has been missing for a month. Aaliyah was put on the system as missing by Prince George County Police Department on Tuesday, February 8, 2022. The teen was last seen attending her first and third period classes at Bladensburg High School.

77-year-old Jerry Rye has been confirmed deceased after his family reported him missing on February 12th.Photo from Renton PD's Facebook Page. Political strategist Angela Rye has given a tragic update for her missing uncle Jerry Rye. The 77-year-old was reported as missing endangered last month on February 12, 2022. His family ended their frantic search after Renton PD confirmed that he was found on the 4900 Block of Shattuck Pl. S, in Renton.

This is the missing person poster Angela Rye shared on her face book page.Angela Rye's Facebook Page. Former CNN commentator and current political strategist Angela Rye is pleading with the public for information on her missing uncle. Jerry Rye, a 77-year-old Black male with dementia, was reported missing out of Tacoma, WA.

Lauren would have celebrated her 24th birthday on Sunday.Photos taken from Lauren's Instagram page. Lauren Smith Fields is a 23-year-old Bridgeport, Connecticut resident. She was a Norwalk Community College student and an aspiring cosmetologist and eyebrow specialist. Lauren tragically died December 12, 2021, after she was reported unresponsive by Matthew LaFountain – a Bumble date she allegedly met just 3 days prior.

Virtual Career Fair Coming to Atlanta, GAPhoto from the event page on Eventbrite. There will be a virtual career fair that will put veterans seeking new opportunities on the radar of the top recruiters of several high-profile companies. Companies that will be in attendance will include Amazon, Target, Coca-Cola, Nike, Microsoft, and several others. The three-hour event will be held Tuesday, January 11, 2022, and will be from 11:00 AM – 2:00 PM EST.

Matrix Resurrections was a Solid B-

Matrix Resurrections Poster.Photo from the Daily Plot. First, this will have spoilers. I don’t know why anyone would read the title and not know that, but just in case — SPOILER ALERT.

Kirsten Dunst in Interview with a Vampire.Photo taken from The Vampire’s Wife. I’ve always wanted to be a writer. I begin my career at the tender age of 11. Our teacher instructed us to write about a group of black people passing through the Underground Railroad escaping the South by going North to gain freedom. It needed to be at least one full page. What did I do?