We Swam With Sea Turtles For Free! 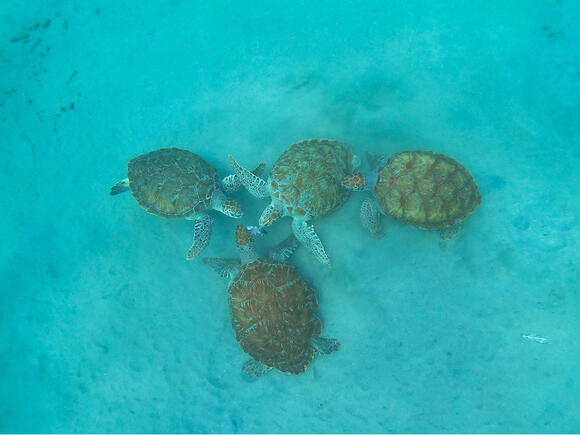 These turtles are sharing (or maybe fighting) over a the remains of a fish, dropped by the fisherman above.Quench Your Adventure

Imagine getting to swim with sea turtles for however long you’d like. Nobody is directing you or telling you what to do. And the best part is- it's free! If that sounds like something you’d be interested in, then plan an epic vacation to Playa Piskado in Curacao! We flew from Miami, Florida to Curacao.

It’s part of the ABC Islands in the Caribbean Islands: Aruba, Bonaire, and Curacao. All three islands are part of the Kingdom of the Netherlands. Playa Piskado is truly a hidden gem.

There are no parking fees (but you just park on the side of the road), and also no concession stands or lifeguards, which means you should pack a lunch and swim with a buddy! You need to bring your own snorkel, mask, and towel as well. The only thing the locals might charge you for, is the lounge chairs they bought and put out by the water. You can play a fun game of “spot the iguana” while they take lounge on the tree branches hidden far above you. There is also sea glass aplenty and tons of room to explore the rocks and cliffs.

What we liked best about this gorgeous place is that the sea turtles are there on their own accord and you have a chance to see them in their natural habitat. They aren’t part of any excursion and the reason they stay nearby is because of the fisherman who stand at the docks and sell their freshly caught fish (another perk)! They toss the extra bits of fish into the water and attract the turtles into a feeding frenzy.

We were lucky to see around 10 to 15 sea turtles. We saw sizes as little as Squirt and as big as Crush from "Finding Nemo."

When you travel to very popular places, like the Bahamas, you typically have to book excursions if you want to find something cool to do. Nothing wrong with paid excursions, we've been on plenty, but if you're looking for a more low-key, authentic experience, Playa Piskado is wonderful. You will need a vehicle to get out there because it is on the far west coast of the island, away from all of the tourism, and will be about a 45 minute drive.

Our friend Lorie recently moved to Curacao and has visited the beach four times. She has seen turtles every time she has been! The best times to see these beautiful creatures would probably be around midday. (Don't hold me to that!). Something we should’ve done, was buy the local fish and grill it up later for dinner. I guess we will have to go back!

The turtles just seem so chill. They just cruise around you and explore, but with a swish of their fins, they can disappear in an instant. They’re surprisingly very fast creatures when they want to be.

All the underwater shots were taken with the GoPro Hero 7 Black attached to a selfie stick from LifeStyle Designs. On your way out to Playa Piskado, keep your eye out for flamingos. Along the road there's some bodies of shallow water and we saw a large family of flamingos out getting some lunch.

Also towards that side of the island is Daai Booi beach where we saw a wild pig roaming around. This beach also has a cool trail, lined with cacti, where you can walk along the cliff side. Be careful!

This was easily one of the best wildlife experiences we’ve had on a trip. If you're planning your next tropical adventure, we would absolutely recommend Curacao! Thank you for reading! Now go out there and Quench Your Adventure!

More from Quench Your Adventure

National Parks in the USA

We have been to several National Parks in the USA and around the world. We love National Parks. Amongst the variety of outdoor adventures you can embark on, the reasons to love national parks are endless – they are educational, full of mysteries and provide spiritual inspiration. When you visit a National Park, not only are you exploring new territories, but you become open to new discoveries…in nature, life, and in yourself. Being outdoors in wide-open spaces can spark creativity, and inspire you to imagine unlimited possibilities. I am looking forward to my next visit to the National Parks.

We have been to Colorado over 6 times now and we have some recommendations to share with you!. Colorado is the perfect road trip destination. The Rocky Mountains, the national parks and state parks, the historic towns, and the diverse landscapes are all linked together by some of the most beautiful drives in the United States. Add one of these stunning routes to your itinerary.

Out of the hundreds of arches in Arches National Park, the Delicate Arch should be at the top of your list of places to visit. Standing 46 feet high and 32 feet wide, this off-worldly landform is something you’ll have to see to believe! Surrounded by a sea of orange stone, it’s easy to see why the Delicate Arch is so famous. The hike to delicate arch is uphill but very worth it. The area is quite windy so make sure to keep a hold of your hat. Bring lots of water and a camera! The new ticketed entry system worked well and there was parking available at the trailhead.

Jeremy’s all time favorite shot he took from Glacier National Park.Quench Your Adventure. 1. Look for transition areas. Like big valleys, grassy fields, or rivers. 2. Sunrise and sunset are great but this bighorn spotting was the middle of the day!

If you need a reason to visit Glacier, consider its name. Sadly, within our lifetime, Glacier National Park will lose the ice that gives the park its name. There’s never been a more important time to plan your trip here. Plus there is a lot of wildfires and heat out here.

The view from the Fairy Falls hike.Quench Your Adventure. We have been to Yellowstone a few different times and each time is absolutely incredible! The landscape here is unlike anything we’ve have ever seen. From boiling hot springs to erupting geysers, there is a surprise waiting everywhere you go. It was created in 1872, well before Wyoming was even a state, making it the world’s first national park.

Our Top 10 Small Towns (in no particular order)

Our Top 10 favorite small towns (in no particular order) If you’re curious what qualifies a small town, Google says less than 25,000 people. Jeremy and I have been traveling for the past 8 years. We have lived in different states, different countries, have lived in a van, and lived in an RV for 14 months. We have see a lot of the USA. We have seen 46 states so far! We feel very lucky to have explored so much of the USA which is so unique and so beautiful. We haven't seen Alaska, Hawaii, Nebraska, and Oklahoma! We put this list together have 14 months of RV living.

What No One Tells You About Goblin Valley Yurt Camping

Welcome to Goblin Valley State Park! This strange and colorful landscape is filled with bizarre sandstone rock formations called goblins. Visitors can wander off-trail to explore the geology and hike among the nooks and gnomes. This remote but very popular campground is a great base for exploring the goblins and the nearby San Rafael Swell. Near the town of Hanksville, approximately 216 miles southeast of Salt Lake City. Open year round. No holiday closures.

Quench Your AdventureWhat did I do in between teaching classes today?. I went blueberry picking. All we did was walk from our RV to the rows and rows of blueberries. We picked over ten pounds of fresh blueberries right off the bushes here in Oregon. With breathtaking views of Mount Hood. Super thankful for a safe and gorgeous place to sleep overnight. Thank you to @harvesthosts & @montavonsberries. One of our favorite Boondocking spots that we ever got while full time RV living was located in beautiful Parkdale, Oregon between Hood River and Mt. Hood.

Have You Heard of Deception Pass State Park?

Quench Your AdventureEnjoying a beautiful sunset at Rosario Beach in Deception Pass State Park. Deception Pass is Washington's most-visited state park for a reason. Mysterious coves, rugged cliffs, jaw-dropping sunsets, and a stomach-dropping high bridge make this park a go-to for locals and international travelers alike. The park is actually located on two islands — Fidalgo to the north and Whidbey to the south.

Where should you sit on an airplane?

Taking a flight anytime soon? Well my friend's husband is a pilot and we asked him some questions about the plane, where to sit, and why! Here is what we found out:. Best seat for sleepers: A window seat near the front.

In August of 2017, we moved to Kernersville, North Carolina. Coming from Florida, we've spent plenty of time at the beach, therefore, the fresh allure of the mountains kept us heading West for most of our local adventures.

Making Money As An Online Tutor

Last night, I made the most $$$ I’ve ever made in my life doing what I love most. I made $345 in 45 minutes of teaching. I got to teach a class to 12 year old girls all about how to be a good babysitter. Super thankful that not only do I have a job but I can work from anywhere doing this job.

A Guide to RV Life

Have You Heard About The Hoh Rainforest?

Most people know about the Amazon, the world's largest tropical rain forest. However there are several lesser-known rain forests, such as the Hoh Rain Forest. Most people know Seattle's reputation for being rainy ALL the time. Seattle gets around 36 INCHES of rain a year compared to the Hoh Rain Forest which gets 14 FEET of rain a year. Wow! Its unique ecosystem has remained unchanged for thousands of years and it is now the most carefully preserved rain forest in the northern hemisphere.

A Guide to Make Money While Traveling

We have been full time traveling for the past 19 months. People ask us all the time what we do for work...well I, Jenna teach online and Jeremy is in sales. We have asked some of our full time travel friends what they do and this is what they said.

Enjoy Your Next Camping Trip

Why sleep in a comfortable bed with a fluffy pillow and customized climate, when you could sleep on the ground, in uncertain weather conditions, surrounded by a flimsy, canvas structure and probably bugs?

A Guide To Airbnb Hosting

We’re not Airbnb hosts but we’re frequent guests and we hope to host in the future. We dream of owning a tiny home or shipping container or treehouse for guests to experience. We have stayed in many different Airbnb's around the world and have learned a lot. There were so many times we wish an Airbnb could've warned us about. Like the time we were woken up every hour on the hour by their roosters and dogs...