The newest restaurant to ring in the 50th Anniversary of Walt Disney World is Woody’s Roundup Rodeo BBQ. Coming Soon to Toy Story Land in Hollywood Studios. This project is set to complete by the end of 2020. While we don’t know if that deadline still rings true, we wanted to share everything we know so far about the restaurant and what we all have to look forward to once it arrives!

In a park like Hollywood Studios where the look and feel was dangerously close to being all about the “Disney Adult,” the arrival of Toy Story Land was a breath of fresh air. Very fresh. Suddenly there were kid friendly rides both fast and slow, and even an outdoor counter to grab lunch. The key word there being, outdoor. If you were around when Toy Story Land opened in the hot summer of 2018, you would have seen the hoards of people descend on Woody’s Lunchbox to get food, and then subsequently complain that there was nowhere inside to sit. We all like our air conditioning during lunchtime hours in Florida.

As a result, by the next time we visited a couple months later, trees had been planted for added shade. Nice. Plus, giant fans were added to the seating area of Woody’s Lunchbox. Which of course caused a little too much breeze to make eating enjoyable. And there still wasn’t enough seating. So, again, people complained.

At the same time there was this bigger conversation at Hollywood Studios of “what do I do with my kids while i’m here?” That quick lunch outside wasn’t really the break parents were looking for. And while Hollywood and Vine was a decent character meal alternative for fussy children, the atmosphere felt dated, and not very fun. Thus, Woody’s Roundup Rodeo BBQ Restaurant was born. 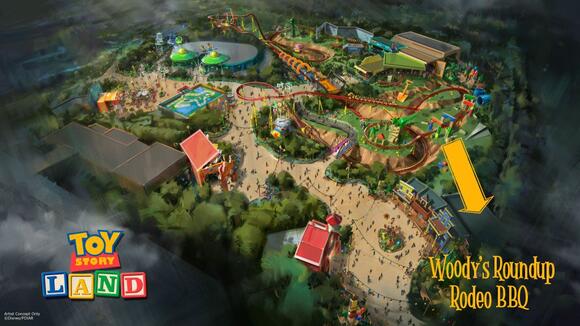 When you first enter Toy Story Land you’ll see the large Woody statue. The restaurant will be right behind that statue to the right. It’s a very large structure, surely one that could include a whole rodeo inside, it’s just that big! One of the coolest parts of this new place, which you’ll see in the concept art above is that it may just be the first of future phases coming to this entrance area. Notice a few other elements were in the original Toy Story Land concept that we haven’t seen yet? Al’s Toy Barn to the left, or something similar. And to the right a little Western Town as part of the play set, with little storefront spaces and a wide front porch. 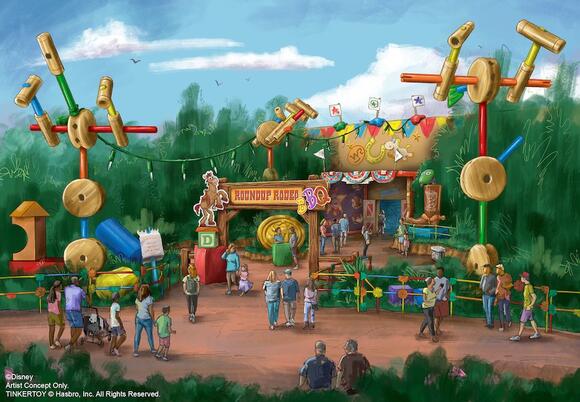 What is most exciting about this new space, is the medley of characters all joining in on the Western fun. Even Rex gets a part of the action. As part of the immersive experience of this restaurant, guests will be surrounded by “Rodeo Festivities in Action.” Sounds a little scary, right? We figure that both Woody and Jessie will be close by to tackle, or lasso, things if they get out of hand.

Another fun element of this new restaurant is that you’ll be able to spot your favorite Disney Pixar characters in the form of toys and game pieces throughout the restaurant. Scavenger hunt anyone? You can bet we’ll be making one! Disney has shared that there will be a “ toy version of Jessie riding on the back of a Trixie pull-toy and unique toy versions of Bo Peep and her sheep, all who appear to be performing in the rodeo together.” So you can be on the lookout for that too!

Joining the other toys and playsets in Andy’s Backyard, this new restaurant has been constructed by Andy himself. Built to look like three cardboard boxes, taped together, this Rodeo Arena is perfect for Woody, Jessie and all the Toy Story toys. You can expect to see multiple play sets in action to create this new space for families to come and chow down. 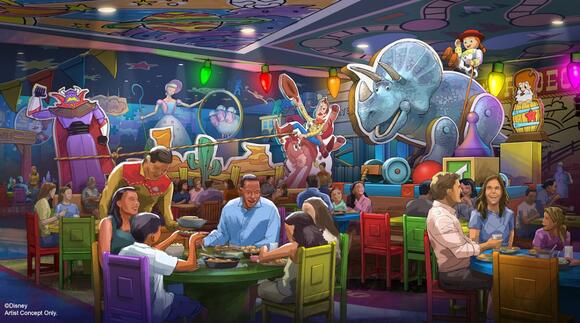 Originally slated for a late 2020 opening this new restaurant has had construction happening as of March 2021, so we’re anticipating a late 2021 or 2022 opening. 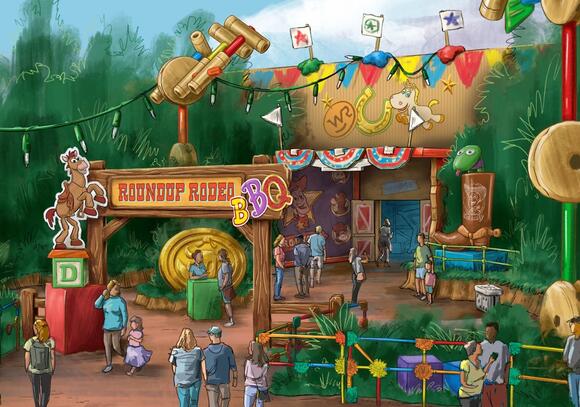 Woody’s Roundup Rodeo Menu has not yet been shared. Stay tuned. We’ll update this post as soon as it’s announced.

This new BBQ restaurant in Toy Story Land is the perfect addition to Toy Story Land. Offering indoor seating, a fun atmosphere, and opportunities to see Woody and Jessie in action, you can bet every Toy Story Fan will be lining up for this one. We cannot wait to have a fun restaurant added to the Hollywood Studios Dining options . 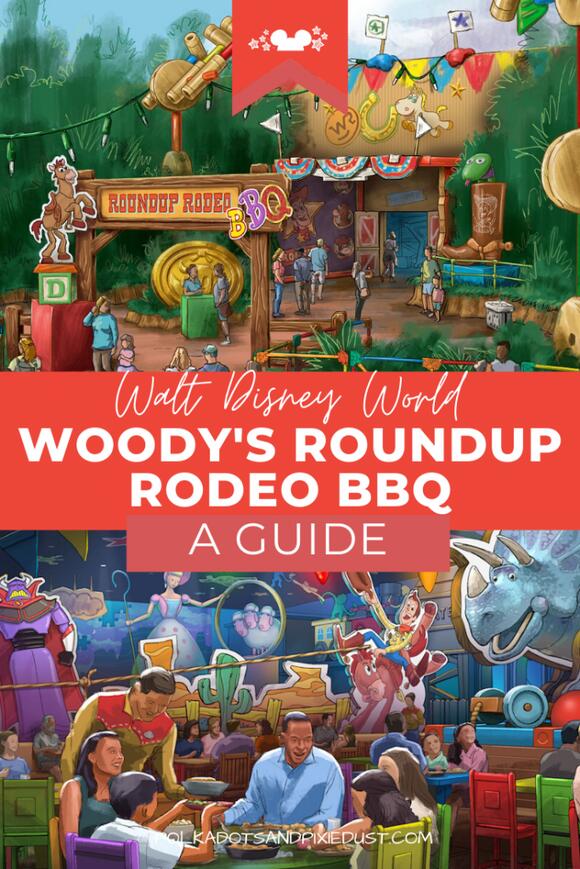 All About Early Theme Park Entry for Disney Resort Guests

Early Morning Theme Park Entry is a new perk reserved for Disney Resort guests and guests staying at select Good Neighbor hotels. And with the change of Rope Drop at Magic Kingdom comes a slew of things to consider. Especially if you’re planning to get people-free photos or get to the parks extra early. Here are all the details about the Early Theme Park Entry so you can decide whether or not you want to get up early on your vacation.

Disney's FastPass+ Service has been replaced with a new service that allows access to rides via the "Lightning Lane". Available for select rides and at a cost, this new offering is part of the new Disney Genie+ service for Disney Vacationers. Coming this Fall.

Everything you Can do in the Fall at Walt Disney World

Spending Halloween at Walt Disney World is always a good idea. Unlike the later part of the holiday season, you don't have so many crowds, you still have decent weather and frankly, it's when the things that are MOST FUN finally happen. While we love all of Disney's festivals and parties year-round, there's nothing that quite compares to the outdoor kitchens at the Food and Wine Festival, the Halloween events, and the fall-themed treats all over the Disney Parks. Here's everything you can do for Halloween at Walt Disney World.

Everything coming to Walt Disney World in 2022

Walt Disney World in 2022 is all about construction projects finalizing, the 50th anniversary of Walt Disney World Resort, and things finally getting "back to normal." With new shows, restaurants, rides, and resorts coming to completion there is plenty happening in 2022. And will make a trip to Walt Disney World well worth your while. Here is everything you have to look forward to at Disney in 2022.

If you're a Disney Cruise Line fan, no doubt you've seen pictures of the boarding process for their most common port, Port Canaveral. The big Mickey that you walk through to get on board, the character ops while you're waiting, and everything looking magical in only a way Disney can. But if you're cruising out of New York City, it's a little different! Here are a few tips to help you navigate this new experience.

5 Reasons to Visit Walt Disney World in the Fall

We love fall. There's just something so magical about the cooler weather, the changing leaves, and dreams of all things pumpkin spice. Fall at Walt Disney World is no different! Although Florida isn't typically a state that sees the beauty of this season like some of us northerners do, Walt Disney World does a fantastic job of bringing in the new season with its own version of festive magic for fall.

With Disney Cruise Line gearing up to re-open cruise vacations, it's time to dive into one of the most popular cruises available. Ready to set sail on the high seas during the spookiest time of the year? Cruising during a Halloween on the High Seas cruise has been one of our all-time favorite vacations to date. So we've compiled a guide perfect for helping you plan and knowing what to expect during a Halloween on the High Seas Cruise with the Disney Cruise Line.

Do you have dreams of vacationing to Aulani, a Disney resort and spa? Here are 8 things we wish we knew about Planning a Disney Aulani Resort Vacation before our trip. Planning a Disney Aulani Resort Vacation doesn't have to be difficult. Yes, it can seem a little more complicated than some Disney experiences, but it's worth it. Hopefully, these tips below will help you plan your trip with less stress.

The new Star Wars Hotel at Walt Disney World is boarding soon. Open Spring 2022, the Galactic Starcruiser at Walt Disney World puts you right in the middle of all the Star Wars Magic! If you're up for an exciting journey to the planet Batuu, ( in Orlando Florida of course), then this is your opportunity to have a 2-night Immersion Experience, complete with activities, missions, time in Galaxy's Edge, and more at this Star Wars Hotel in a Galaxy Far Far Away!

We love coffee. Especially when we can have it in a Disney Park. Galaxy's Edge at Disneyland recently debuted a new cold brew and although we haven't made it out to the west coast yet, we've heard great things! The Cold Brew Black Caf is a cold brew with sweet cream cheese foam cocoa puffs on top! So of course, we had to make a copycat recipe.

Where to find Running and Walking Paths at Walt Disney World

If you are a runner or walker then heading to Walt Disney World allows you access to tons of trails, paths, and easy ways to get from one place to the other. With runDisney becoming more and more popular not only for runners but also for vacationers it's good to know where you can find the runDisney paths sponsored by New Balance to help you avoid the crowds, get in a workout, or safely get to and from the parks or resorts.

Epcot's newest interactive game is replacing Agent P's World Showcase Adventure as the interactive park scavenger hunt you can play on your phone. The Ducktales World Showcase Adventure Game is by far bound to be the most fun and exciting yet! While we don't have a launch date for this new game at EPCOT, there are a few things we do know about the characters, gameplay and where you can find it!

With Walt Disney World's 50th Anniversary comes changes in all four parks, resorts, Disney Springs, and more! Even new services and changes in planning a Disney Vacation are in the works. And if you haven’t been to Walt Disney World in the last few years you are in for some big surprises! This includes things as big as new lands, and as small as new Disney character experiences. Check out all the Changes for the Walt Disney World 50th Anniversary in All Four Parks. New Rides, Restaurants, Resorts, and everything retiring along the way!

Love Dole Whip? What about a Dole Whip Sundae? If you're anything like us, and secretly telling yourself the benefits of pineapple far outweigh the "dessert" factor of this treat, then read on! We're sharing the Dole Whip Nacho Recipe so you can add a little taste of the islands to your summer!

If you're heading to Animal Kingdom be aware that this is Walt Disney World's biggest park! It simply sprawls across acres and acres of land. And while you won't be walking all of it, you can plan on getting lost in all the hidden cracks and crevices. But, never fear, the Best Photo Spots in Animal Kingdom for Disney Instagrammers and photographers are easy to find and offer an array of backdrops! Let's get started.