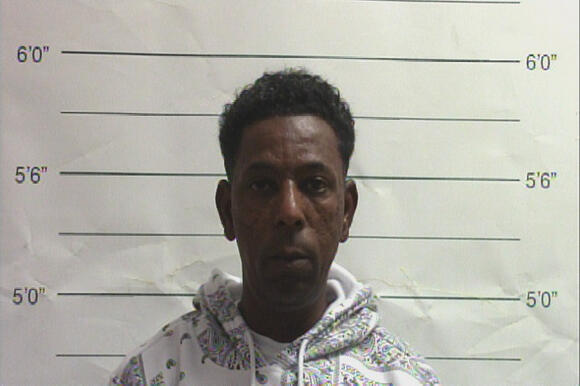 A call was received at approximately 7:30 a.m. by the New Orleans Police Department of a carjacking that involved an aggravated battery by cutting at the location. When officers got on the scene, they discovered a female victim who had been stabbed. Upon arrival at a nearby hospital, the woman was pronounced dead. The victim was positively recognized as Pollack by the Orleans Parish Coroner's Office a short time thereafter.

According to NOPD, with the use of surveillance video, citizen information and a tip to Crimestoppers of Greater New Orleans, the NOPD Homicide Unit detectives developed and positively identified Andry as the offender in this event. After an investigation, a warrant for his arrest was obtained on one count of second-degree murder.

New Orleans Police Department's VOWS officers, as well as agents from the United States Marshals Service, detained Andry without incident this morning on the 2100 block of North Miro Street. As a result of his conduct, Andry was booked into the Orleans Parish Justice Center and held there until his trial.

Anyone with more information about this incident is asked to call New Orleans Police Department Homicide Detective Rayell Johnson at 504-658-5300.

NEW ORLEANS, LA - Many restaurants and shops are available for you to explore at Freret Street. Located just on the north side of Saint Charles Avenue, you can grab a meal here or just take a stroll. Here are some things you can do at Freret Street. Stay tuned for the second part.

NEW ORLEANS, LA - If you are a newcomer to New Orleans, there may be so many things that are quite confusing for you to adapt to the City of Crescent. However, New Orleans is always open to anyone, whether you are married or single. As a city steeped in history, music, and culture, New Orleans has so much to offer.

Reason Why the New Orleans Saints wore Black and Gold

New Orleans, LA- National Football League's New Orleans Saints have been known for their black-and-gold color since their inception in 1967. But, it wasn't always the case for the Saints during their beginning as an NFL franchise.

Acrylic Painting with artist Larisa Clevenger at the Beauregard-Keyes House

NEW ORLEANS, LA - Acrylic Painting with artist Larisa Clevenger is back at the Beauregard-Keyes House. Sign up to explore the skills of acrylic painting. The class will take place on Saturday, September 11 & 18, and October 2, 2021, from 10.30 a.m to 12.30 p.m.

BATON ROUGE, LA - Knock Knock Museum is pleased to announce the return of a more regularized birthday party schedule. Celebrate your child's special day in one of the museum's 18 Learning Zones. You can book the party starting this month.

DONALDSONVILLE, LA – If you are visiting Donaldsonville Louisiana, or are planning a trip for September, make sure you visit the historical spots. The museum and historical sites in Donaldsonville have a lot to offer. Here are several museums or places that will bring you to the old memory.

NEW ORLEANS, LA – You are invited to have fun and to enjoy three courses of great food at the private opening of Holy Smokes Barbecue presented by Smoke Boss/Pit Master Brother Irvin Bell and Jarvain Bingmon. The event will take place at Grace Community Church on Sunday, September 5, 2021, starts from 2 p.m – 4.30 p.m.

NEW ORLEANS, LA - Phani Vadrevu, a computer science professor at the University of New Orleans, has been awarded a $1.2 million grant by the National Science Foundation to combat social engineering attacks.

NEW ORLEANS, LA - Celebrate your children's birthday party at Café du Monde in City Park. Café du Monde has various locations but the one location available for parties is the one in City Park, located at 56 Dreyfous Dr. New Orleans, Lousiana.

Cheryl Teamer of New Orleans & Company passed away at 58

NEW ORLEANS, LA - New Orleans Athletics has decided to defer EmpowHer Privateers Brunch to the Spring of 2022 due to COVID concerns. The event was planned to take place on August 27, 2021. The event's new date will be announced at a later date in accordance with the City of New Orleans' COVID-19 guidelines.