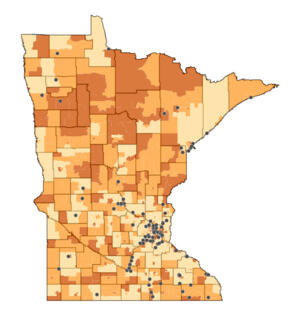 Northern Metals and GAF are two companies that have permissions that do not expire. Pollution from these businesses has long been a source of concern for Northside residents. Representative Fue Lee (District 59A) has sponsored legislation requiring such institutions to have public meetings every five years to allow for public inquiry into permission restrictions and compliance.

Wendy Hanson and Julia Evelyn of the North Minneapolis Promise Zone VISTAs plotted the locations of all Minnesota institutions with non-expiring permits to determine the number of facilities in high, low, or intermediate socioeconomic vulnerability areas. Incorporating variables such as socioeconomic level, race, ethnicity, and language, household composition, housing and transportation, the Centers for Disease Control and Prevention's Social Vulnerability Index (SVI) is based on census data.

The map and data were presented to a joint Northside-Southside Green Zone conference on April 6, 2021, which included representatives from both neighborhoods.

According to these findings, facilities with non-expiring emission permits are a source of environmental injustice in the community. These operations generate considerable amounts of air pollution, which places an additional load on Minnesota citizens who are already at risk of serious health consequences.

The interactive map can be viewed by visiting the following link: https://arcg.is/1in5ye.