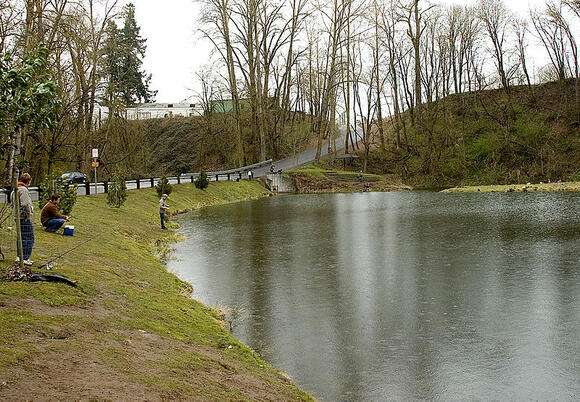 Today, the creek flows into an artificial, 156-acre Del Clark Lake, which has a park, campground, and swimming beach.

Way before that, on July 26, 1963, a severe rainstorm dumped more than five inches in the area. After a 600-foot drop from its source on Buffalo Ridge, Canby Creek flooded through Canby, causing major damage and injury.

After that incident, a local committee was formed to discuss the issue. Then in 1972, the committee turned over the project to the Lac qui Parle-Yellow Bank Watershed District.

In the early 1980s, the lake was built with a long, earthen bulwark stretched across Canby Creek valley. In 1986, the project received the “Seven Wonders of Engineering Award”.

Currently, Del Clark Lake presents Stone Hill Park with a campground, swimming beach, and quality fishery. There are eight to ten thousand vehicles pass through the gates every year. A controlled outlet prevents downstream flooding and maintains the lake at a 13-foot average and 30-foot maximum depth.

The result of a recent water quality test in the Lac qui Parle River Watershed by the Minnesota Pollution Control Agency (MPCA) shows that Del Clark lake meets standards for aquatic recreation, which is not the norm for waters in western Minnesota or even the rest of the watershed.