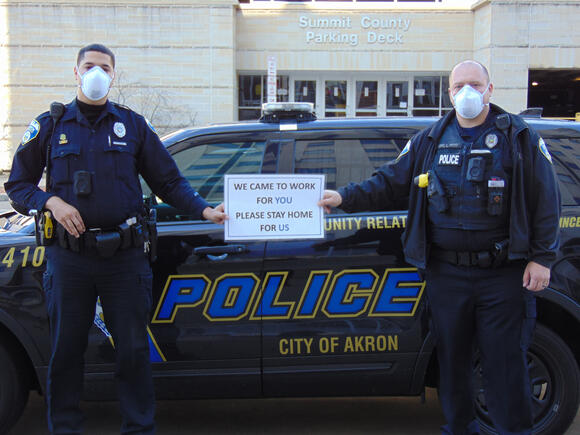 AKRON — Akron Mayor Dan Horrigan made several announcements on June 8 related to the final phase of the national search for a new chief of the Akron Police Department (APD).

This phase will focus on community engagement, including releasing the names of the top four candidates, the date of a virtual community town hall, and the results of the city’s community survey.

The Chief of Police position is currently vacant due to Chief Ken Ball’s retirement in February 2021. The city subsequently launched the search in early March. After finishing the first round of candidate interviews by Mayor Horrigan and a diverse internal team of cabinet members last week, the top four candidates are finally selected.

“I am impressed with the pool of qualified candidates who applied to be our next Chief of Police. I am looking for an individual who has the experience, temperament, and integrity to drive this department forward. We face significant challenges related to violent crime and strained community trust, and we need a chief who places a primary value on transparency, inclusion, and crime prevention, and who is prepared to drive change where needed. They must be a listener and a leader at the highest level,” Mayor Dan Horrigan said.

To help drive the priorities of the interviews and the final selection, Mayor Horrigan surveyed the community about the most pressing issues facing Akron with respect to policing. A total of 1,427 responses were collected during the survey conducted between March 9 and April 23.

When asked what priorities the respondents thought the APD should focus on, the top three results were reducing police use of force, reducing racial disparities, and community-oriented policing. Most respondents wanted the APD to focus more on communication, visibility, and respect.

Mayor Horrigan will host a facilitated Community Town Hall with the top candidates on June 17 at 5:30 p.m. This event will be broadcasted live on the City’s Youtube page at www.youtube.com/cityofakron. Those interested in submitting recommended questions should send an email to APDChiefSearch@akronohio.gov or contact the Mayor’s Action Center at 3-1-1 or (330) 375-2311 by June 16 at noon.