Oregon Coast Breaking News brings you local news with a focus on positive stories, community awareness, and celebration of our Oregon culture.

Newport, OR
95 followers
Alsea, OR

At their August meeting the Port of Alsea board of commissioners approved to terminate the lease for Mike Gatens, owner of Shrimp Daddy, as of March 31, 2023. Mike has been leasing a shop space from the port near the Alsea Bay for shrimp processing since 2014. According to Roxie Cuellar port manager, the port is wanting to use the shop to build and repair crab pots and for making crab measuring devices. Cuellar and the port board have accused Mike's employees falsely of drug use. During the port meeting Mike showed the board that he had drug tested all of his employees and everyone showed negative for any drugs.

Mike said he is doing his best to try and stay positive, despite the false accusations and negativity from the port and their employees. "I have tried to stay positive, despite being targeted especially on social media." He added he felt that the board had made up their minds about terminating the lease before the meeting. He didn't feel that they would listen to anything that he or his supporters had to say.

Cuellar stated that they want to use the space themselves so they don't have to pay taxes on it, which they do if the space is rented out. One of Mike's customers, a major supplier of shrimp throughout the northwest, sent a letter to the Port Commission explaining what a hardship it would create if they were no longer able to get shrimp from Shrimp Daddy. This decision not only affects the 4-6 employees that work for Shrimp Daddy, but could also cause the loss of jobs to their company as well. 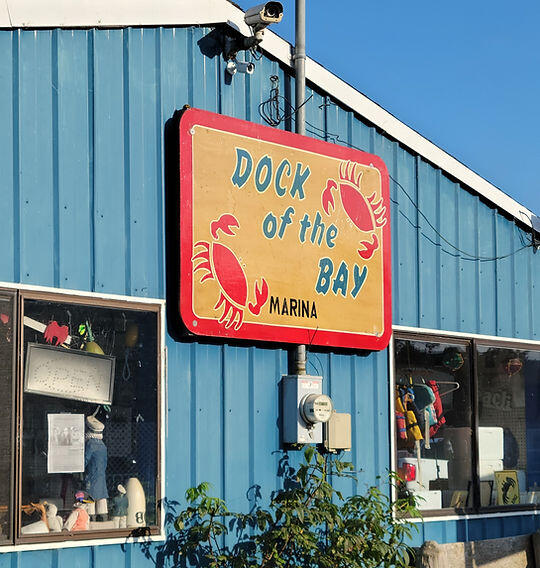 Dock of the BayKiera Morgan

When the business Dock of the Bay came out of probate after the owner passed away Mike said he tried to lease the space from the port and they turned him down stating they had others uses for the space. The port purchased the business and currently runs this business renting boats, selling fishing and crab bait, rents crab pots and cooks crab. This is in direct competition with Shrimp Daddy that operates a bait shop and crab cooking facility a block away.

During public comment at the end of the meeting things got heated when those who were talking were interrupted by others who disagreed with what they were saying. Port supporters chastised citizens for speaking out against the port board volunteers. When Jim Robinson tried to talk to port commissioners about his concerns he was interrupted over three times by Cuellar and each time he asked her to please not interrupt and let him talk as it was his time to speak to the board. He stated he strongly disagreed with the port competing with private businesses who are making or repairing crab pots, cooking crab and selling bait. Ryan Pankey , a family member of board member Buster Pankey, yelled at Jim and called him a "pompous ass".

Others who spoke during public comment expressed dissatisfaction with not enough space at the dock for crabbing, and lack of slip space available for locals. Kurt Saindon, said he started a petition to recall the board but has since withdrawn it hoping that the board would "come to their senses and do what’s right. Opening the outer dock for crabbing and letting handy capped people rent which ever is the closest available slip to the gangway despite length of vessel."

He wants the port to encourage any and all commerce and event opportunities at the port not shut it down in worry of parking. He really wants the port to have all the opportunity to change their decisions and let the people have access to their docks like before. As for the future of Shrimp Daddy, Mike said he is actively working to find a new place to house his shrimp processing business.

Oregon Coast Breaking News brings you local news with a focus on positive stories, community awareness, and celebration of our Oregon culture.

Lincoln County, OR21 days ago

Alcohol Possible Cause of Fatal Crash On Hwy 101

On Monday August 22, 2022, Lincoln City Police arrested 45-year-old Robert Wayne Norton, of Dallas, Oregon, on multiple charges including Possession of a Stolen Vehicle, and a Felony Parole Violation Warrant. At about 8:30 PM, Lincoln City Police Officers responded to the Dory Cove Restaurant located on Hwy 101 in regards to a person who ate a meal and then left without paying for it. During the course of the investigation officers determined the suspect left the restaurant in a white 2007 Nissan Altima, which had been reported stolen out of Dallas, Oregon.

Lincoln County Sheriff's Office Patrol VehicleLCSO. Effective July 31, 2022, Lincoln County Sheriff Curtis Landers announced the Sheriff's Office will be reducing patrol deputy response to non-criminal calls for service and certain lower-level criminal complaints. The reduction in service is due to an extraordinarily low number of certified/sworn deputies available to handle emergency calls. Deputies will be focusing primarily on responding to emergency and in-progress calls for service. “We have been evaluating this situation for over a year and it doesn’t seem to be improving” stated Sheriff Curtis Landers. “We have multiple contracts and a taxing district for law enforcement services that we need to uphold.”

At 3:05pm on Saturday July 30th Central Coast Fire and Rescue were dispatched to a grass fire in the area of the Port of Alsea. The initial response and first on scene was a Brush Truck. They located the main part of the fire at the corner of Commercial Street and Spencer Street. Lieutenant Cody Johnson immediately traversed the beach access and began a 360 evaluation of the fire. His initial assessment was that about a half of an acre was burning. Meanwhile, the other two crew members, Engineer Taylor Jernigan and Fire Fighter Connor Mercer, begin deploying hose line and started the initial attack of the perimeter. Lieutenant Johnson requested a water tender from Seal Rock Fire.

On July 17, 2022 at 10:56 PM Deputies with the Lincoln County Sheriff’s Office were dispatched to a report of a burglary in progress near the 1000 block of S. Bay Rd in Toledo. The female caller, who was inside the home hiding, could hear a disturbance between an unknown suspect and an adult male of the home. At approximately 11:13 PM Deputy Landry arrived at the location and learned the suspect, identified as Ted Shipley, age 29 of Toledo, had fled the residence after two physical altercations with two separate residents of the home. Deputy Landry’s investigation further revealed Shipley was a past childhood friend of an adult daughter currently living in the home; however he was not invited or wanted in the home.

Driver Arrested For Meth and Warrants

State Police Trooper Kolacz stopped the driver of a Honda Accord for a moving violation on Hwy 18. During contact the driver he provided false information about himself, was not carrying a driver’s license, and had three active warrants for his arrest when he provided the false information. The driver, identified as 35-year old Charles J Cupell was arrested and transported to the Lincoln County Jail where he was lodged on the three warrants (two out of Lincoln County and one out of Clackamas County) and three new crimes. He was issued a violation citation for having less than 2 grams of methamphetamines, for driving on a suspended license, and driving without insurance.