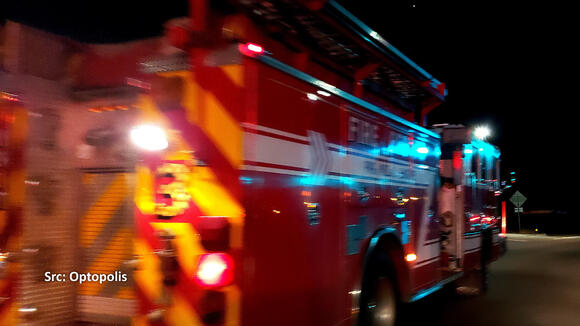 Ground has officially broken ground on three brand new fire stations belonging to Cheyenne Fire Rescue. Here's some context into the things that are changing as well as the locations where all the stations are being built.

Not including the newly planned stations, there are currently five operating CFR stations in the capitol city, also not including Station No. 4 which closed in 1987 according to the CFR website. Posts on the CFR Facebook page, a post on the city Facebook page, and articles from other news sources indicate that two of the stations will be relocating from old locations; the other station will be an expansion.

Fire Station No. 3 is currently located on the corner of E Lincolnway (US-30) and Cleveland Avenue, while (Cole) Fire Station No. 5 is located in front of Walmart at the intersection of Blue Grass Circle and Dell Range Blvd. According to the station locations page of the CFR website, Station 3 was built in 1981 and Station 5 in 1963.

CFR held a ground breaking celebration at the future location of Station 5 back on October 5th, sharing the plans for the new stations. This would be the first of the three new stations to break ground.

Where is Station 5 moving? What'll happen to the RC track?

Fire Station No. 5 is moving to Converse Avenue across the street from the Junior League Baseball Complex. It will be taking the space between Converse Avenue and the bike path that was previously occupied by the South East Wyoming RC Club. The foundation of the new building is already in the works.

Many are wondering what will happen to the RC racing track that was located on that plot of land. Turns out that, according to a post on the South East Wyoming Racing Club's Facebook page, they are planning to relocate to a new location somewhere in the county although there doesn't appear to be any confirmation as to where exactly yet.

As of November 18th, the RC viewing platform still stands just outside of the work zone for the new station, as seen in the photo below.

Where is Station 3 relocating?

CFR Station No. 3 is moving next door to Ashley Furniture off of Nationway. More specifically, this station will be using the vacant plot of land along Old Trail Road and Hanson Street. Work on the surface has already begun.

What about the brand new fire station?

Otherwise known as station 7, the new CFR station will be located about a block from US 30 along Whitney Road. They'll be taking over the plot of land just south of Countryside Avenue and just west of Whitney.

Plans in the city planning website do indeed clarify that some of the existing structures on this plot of land will be demolished including an old mobile trailer home. The area has already been fenced off, and ground will likely soon be broken for the new building.

What will the new stations look like? When will they be finished?

Based on site plans submitted to the city planning website, all three stations will carry a similar appearance and design, taking a modern spin in the process. You can see the general building design featured on huge signs posted at each of the locations (like the one below).

Site plans indicate each building will have an area of roughly 11,400 square feet. Interestingly, each station is planned to be oriented in roughly the same direction in comparison to the compass - that is, bay doors on the north and south sides of the respective buildings; it's worth noting that the layout will differ with where offices, etc. appear as well as the roadway used for fire trucks, etc. coming or going from each.

CFR is aiming to have all three new stations open sometime in 2023. Right now, ground is in the process of being broken at each location as mentioned at the start of the article, with each location fenced off from its surroundings.

What are your thoughts of the new stations? Do you feel it is long overdue for a new fire station to better support the currently-growing capital city? Let us know your thoughts in the comments!