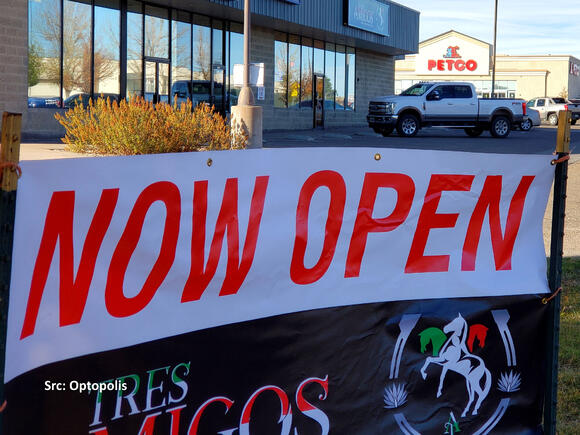 Starting to the west and moving east...

Tres Amigos opened their first Cheyenne location back in August 2021 in the former Village Inn along W Lincolnway. That location seems regularly busy (at least, the parking lot has been relatively packed when passing by during their business hours as observed here at Optopolis).

By August, they were already beginning to remodel the interior of the former MEAT @ Kennisons restaurant in the Center One plaza just out front of Petco. In September, it was confirmed here at Optopolis as a soon-to-be Tres Amigos Family Mexican Restaurant. The history of this space has already been talked about in the last article of this developing story, so now it's time to share an update on it.

Based on LIVHealth's Instagram posts, their new Cheyenne location actually opened back on July 11th.

Recently, they posted a 'now open' sign facing Dell Range Blvd in addition to creating more posts on their Instagram about the new location being open.

They took over what was previously Nielsen Chiropractic PC. The building itself was built in 1985, and based on Neilson's LinkedIn page, Neilson's Chiropractic was started in 2002. Google Maps currently shows the Neilson office as permanently closed.

It appears that LIVHealth has one other location (according to their website) located in Wellington, Colorado in what was previously a Stitches Acute Care.

What are your thoughts about these two places opening!? Let us know in the comments!