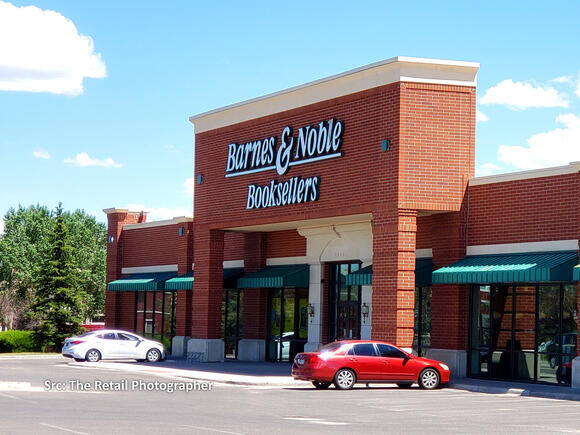 Barnes & Noble Cheyenne when it was still open -The Retail Photographer

Back around the end of March 2022, Barnes & Noble employees learned the Cheyenne B&N store would be closing to move to a new location, and it appears their plans for the new location have changed!

In mid to late 2021, plans appeared in the City Planning website for a new loading dock at Barnes & Noble. At the time, it wasn't entirely clear that Barnes & Noble and Natural Grocers were going to be moving to different locations, but it later did become clear what was up when Barnes & Noble Cheyenne announced on their social media (including Instagram) about their plans to relocate.

B&N began their moving sale on March 31st as can be seen in this video captured that day, closing on May 15th. They originally announced plans to temporarily take over two spaces inside the Frontier Mall near JAX Outdoor Gear--that is, the former All Wild Western and former Asian Gift, both stores relocating to other spaces within the mall--until they could find a better and permanent location.

The date they planned to reopen at the temporary location originally was set for some time in August, eventually getting postponed to late October. Natural Grocers has since closed the old location and reopened at the former Barnes & Noble.

Talk began going around the community as soon as a month ago (today is October 25th) that B&N Cheyenne was already planning to scrap the temporary location idea and instead aim straight for a new permanent home for Cheyenne's B&N. In fact, by the time of uploading the Natural Grocers closing video back on October 7th, the signage indicating that B&N would be opening in the mall had already been taken down, with no noticeable changes made to the two spaces in the mall.

Today (October 25th), Barnes & Noble Cheyenne announced with a post on their Facebook and Instagram pages that they are in fact working towards a permanent location, as can be seen below.

Where could they relocate? When could/will they reopen?

At this time, it can only safely be speculated what they will do. There's been chatter of which location they may take, but none of which have been officially confirmed, and this includes whether they'll build a new store or reuse an existing store front. Just to name off a few possibilities, time will tell whether they'd be opening in the former Big Lots, in part of the remaining vacant space of the former Kmart (Burlington only plans to use about the front half of that space), or even building a new store in a vacant parcel of land.

The word on the street is that they want to reopen at the new location by early next year, though this is entirely likely to change depending on how things go.

Let us know your thoughts of this plan change in the comments; are you glad they are finally planning on reopening!?