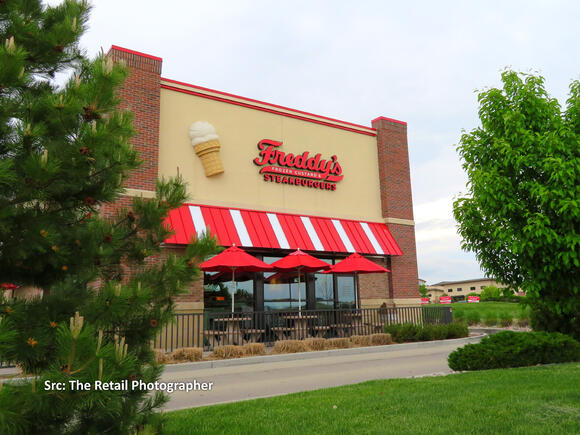 A Freddy's that is currently open, located in Loveland, Colorado -The Retail Photographer

Over ten months ago, an article was posted here at Optopolis that Freddy's was coming to Cheyenne. Things have officially--physically--began rolling at the site of the soon to be Freddy's. Here's a glance at what it'll look like and what to expect!

Plans for a Cheyenne location begin

Talk of Freddy's coming to Cheyenne was already spreading through the capitol city over a year ago by spring 2021. Unfortunately, until later in the year, that was only rumor found via word of mouth; items officially began appearing in the projects section of the Cheyenne Planning and Development website for a new Freddy's back in August 2021, confirming some form of plans were in place.

Items began appearing for permits for Freddy's back in March 2022, when electrical plans were submitted as well as plans for the signage that would appear on the building. A Building Permit item appeared in the planning website on August 30th, suggesting that building the new location wasn't far from starting. In September, plans classified as "Grading" and "Right of Way Permit" appeared in the planning website.

The week of September 11th, people started noticing construction taking place in front of Lowe's Home Improvement--one particular person posting about the news on Facebook on September the 15th, the same day that the location was initially checked here at Optopolis. The field grass was already torn up, with belly dumpers coming and going from the site; a sign was already posted advertising the company working at the site.

This topic was touched on in the original article; however, things appear to have developed further. The general design of the Cheyenne store, yes, is expected to be reminiscent of the Laramie Freddy's, with Freddy's occupying the western portion of the building, leaving a vacant area on the eastern portion of the building that could soon be occupied by something else.

However, more recent plans (including the drawings displayed in the item classified as "Grading" in the permits section of the planning website) show not one--but two--TBD tenants in the eastern portion of the building. One would be a drive thru restaurant, while the other... could be some other establishment. There's been plenty of talk around the Cheyenne Facebook groups about what is expected to be one of these tenants, but at this time, there doesn't appear to be any clear and official confirmation of this supposed tenant.

Currently (as of October 20th), the foundation of the building is already well underway. You can visibly tell at this point in time that there will be three separate spaces including Freddy's as was shown in the site plans submitted to the city planning website. Asking a worker on-scene just to fact check, yes, it is Freddy's who is putting a restaurant here.

Overall, at least some people already seem hyped to see Freddy's coming to Cheyenne, so instead--What tenants would you like to see open next door to Freddy's? Let us know your best ideas in the comments!