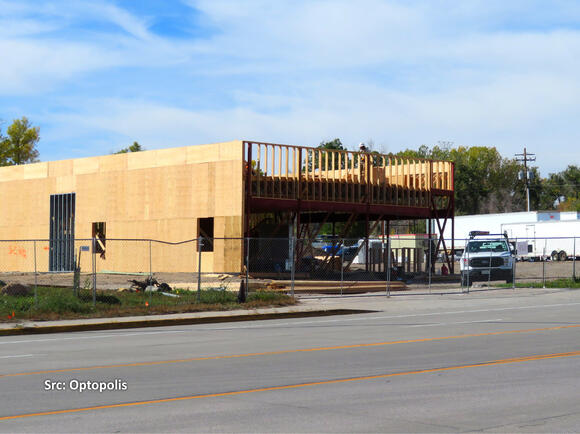 The new McDonald's already has walls being added onto the frame! -Optopolis

A new McDonald's is being built on South Greeley Hwy, which will return Cheyenne to having five McDonald's locations at one time!

A few months ago, site plans were submitted to the county planning website for a new McDonald's to be built at the vacant lot just south of the Outlaw Saloon, in addition to "now hiring" signs being posted on the property. Even a notice of development action sign was posted!

Fast-forward to around the start of August, the foundation of the new McDonald's was already actively beginning the process of being built! By this time, fencing was surrounding the entire property.

Just under a couple more months later, the frame of the building would be built, and as of October 6th, the exterior walls were already going up. Surveyors could be seen actively monitoring the area!

Site plans submitted to the county planning website indicate that, like many modern day fast food restaurants, this location is set to use the very simplistic building design which many people on the internet will refer to as a shoe box. Perhaps the most comparable location that currently exists in Cheyenne is the Yellowstone/Carlson McDonald's, but this building on South Greeley Hwy is set to look even more simplistic.

However, very similar to the Yellowstone/Carlson McDonald's, the South Greeley location will have three drive thru windows, which can currently be seen in the design of the building today. In addition, site plans indicate it'll use the same two-lane order setup, shifting into one lane for the drive up windows.

As for the nitty gritty, revised drawings submitted in one of the permits items indicate the building will have a height of 18 feet, 9.5 inches and a gross area of 4,445 square feet; the total occupancy allowance listed is at 107 people.

When will it be done?

According to the construction crew, the building is expected to be built before the end of the year.

This won't be the first time that Cheyenne has had five McDonald's locations at one time (one of those five, located inside Walmart on Dell Range, closed). However, this will put Cheyenne at a total of six different locations over the years (at least as far as is known here at Optopolis).

What are your thoughts of the south side of Cheyenne getting a new McDonald's? Do you feel this location will be more convenient to access than the location along I-25? Let us know in the comments!