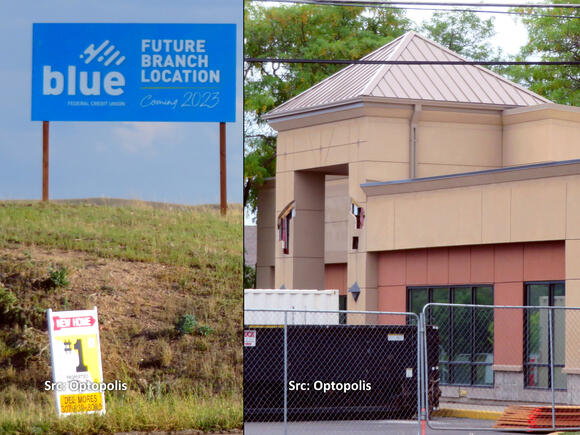 Blue Federal Credit Union is currently in the process of remodeling one of their Cheyenne branches, and they are also looking to expand, with a new sign advertising a new future branch in the new Sweetgrass suburb on the south end of Cheyenne!

The Warren Avenue Blue FCU branch is getting renovated!

The property assessor notes a build date of 1976 for the 7th Avenue Blue FCU branch; it was once one of the Warren Federal Credit Union locations in addition to being one of the earlier locations in Cheyenne. It was converted to Blue around 2016 when Blue FCU was formed.

In August, Blue announced on their Facebook page that the branch would be closed for renovations; there is, however, a temporary branch set up in front of the 7th Ave Blue branch that is operational. The drive-thru ATM is also currently open at the time of writing.

Right now--at the time of snapping these photos and since the Blue FCU sign has been taken down--you can actually see the Warren Federal Credit Union label scar on the building!

Blue is about to build a new branch in the Sweetgrass area.

If you have taken a drive along East College Drive recently or live in the rapidly-expanding Sweetgrass area, you may have noticed a new Blue FCU sign posted on the corner of East College Dr. and Sweetgrass Dr.

Blue FCU is clearly are planning to build a new branch in the area. As of right now, no plans have been submitted on the city planning website, but the sign does state that Blue is aiming to build the new branch by sometime in 2023, and it's worth mentioning that Blue FCU is now listed as the owner of this property on Sweetgrass Dr.

Which are you more hyped for - a new Blue location south of the interstate or a refresh of an existing location? Let us know your thoughts in the comments!