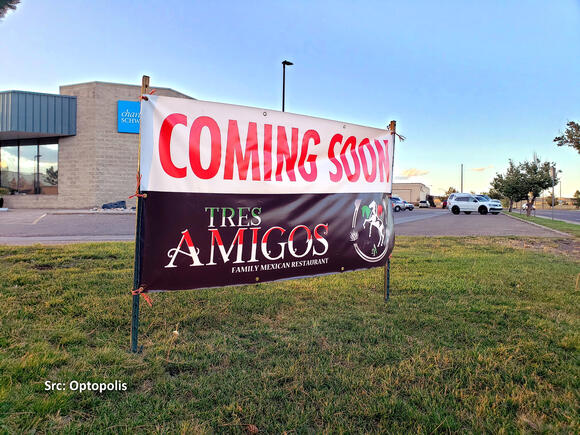 That's right! The Mexican restaurant that opened near the Lincolnway/I-25 interchange is now opening a second location in the capitol city!

Some background on Tres Amigos and their soon-to-be location

First, Tres Amigos - Tres Amigos opened their first Cheyenne location in August 2021 just off of Lincolnway near the former Phillips 66--that is, inside of the former and long since abandoned Village Inn.

Now, for the space in which they are opening along the Dell Range corridor - Many of you will recall MEAT @ Kennisons and/or 2 Doors Down's second location, both of which closed. Some of you will even recall the same space when it was occupied by Primo's or Scotty's, both pizza places that also closed their doors. It appears that the space is now getting replaced again!

It's worth mentioning some detail on the plaza itself, Center One, which was built in 1985 according to the property assessor. Numerous brands have occupied spaces in the plaza building surrounding MEAT, including Brown's Shoe Store, and Dud's and Suds Laundry and Dry Cleaning. In consideration of the soon-to-be Tres Amigos, there is currently one other remaining vacancy - the former Premier Rental Purchase.

The realization of a new tenant

As early as August 14th, it was known here at Optopolis that something was going on at the former MEAT @ Kennisons space with construction work taking place inside the space, but it wasn't quite clear what the construction was for... that is, until now.

It turns out that permits were submitted to the Cheyenne City Planning website back in July, showing plans for building signs displaying the Tres Amigos name with their logo.

How far along is it?

As of right now, there are signs on the building and in the appropriate part of the Center One standalone plaza sign. At the time of taking photos on September 15th, construction was still taking place inside the space.

As seen earlier in the post, they have posted a sign saying the location is coming soon. At the time of writing this article, there is no indication on their website of the new location.

Have you tried their food yet? What are your thoughts of seeing Tres Amigos expand? Let us know in the comments!