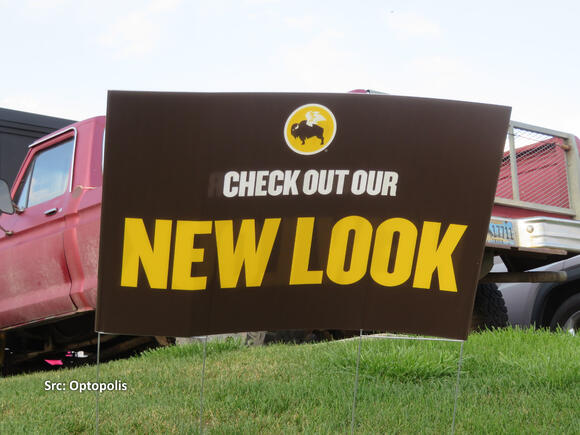 If you've been out near the Dell Range Plaza off of Frontier Mall Drive and Prairie Avenue recently, you may have noticed the old BWW signage has been taken down! Turns out, they are also doing a remodel!

Before Buffalo Wild Wings, the space where BWW stands today was merely a field of grass. A parking lot/road entryway for a future tenant was added around 2007, during the time frame that Cheyenne Marketplace began being developed.

In January 2012 just a few years after the Cheyenne Marketplace's strip mall space was built, plans began to appear in the Cheyenne Planning Website for a new Buffalo Wild Wings, which would be an expansion of the newly built plaza.

It would appear Cheyenne's Buffalo Wild Wings was the first Wyoming location to be built with plans to open locations in Casper and Gillette being announced the following year in 2013. Both locations did open and are open to this day.

What will be changing with the remodel?

Plans mention using two different tones of grey for the façade, some of which can already be seen in use on the building.

It appears the signage will be getting replaced with more modern BWW signage. Some changes are planned to be made to the interior as well, including but not limited to replacing the carpet and painting the ceiling a light grey.

All furniture inside is set to be removed, with plans to "upgrade to new Center Stage furniture." Perhaps this explains why all the old furniture can be seen in the outside patio.

What are your thoughts of the remodel? Let us know in the comments!