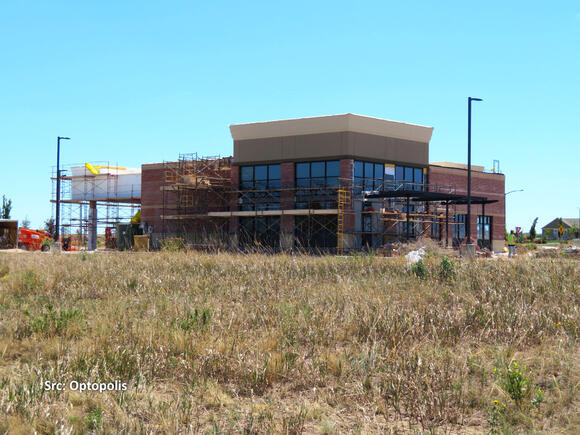 You may have noticed the new Pinnacle Bank being built along College Drive. Here's everything you need to know about the new location!

Optopolis has been informed that Pinnacle Bank is planning to move from the existing location along South Greeley Highway.

It's not entirely clear here at Optopolis when the South Greeley branch of Pinnacle Bank opened, although it is known that it was located in that building since at least 2007. However, The Cheyenne Post noted that Pinnacle Bank has had a physical presence in Cheyenne since 1999.

Before the Sweetgrass area began seeing construction, the land where the new Pinnacle Bank is being built was merely a field of grass. One can also see this in Google Maps Street View imagery from 2020. By September 2021, a sign was posted, advertising the Goodnight Trl/College Dr property as the future home of Pinnacle Bank.

The earliest item to be added to the Cheyenne planning website for the new location was submitted on August 12, 2021. By December 2021, the foundational work was well underway, and by the end of January 2022, the main framing of the building was already in the works.

When is it moving?

A quick phone call has revealed that they are now planning to move to the new location on August 22nd. The sign posted on the front door of the old location seen on August 12th confirms that the move will in fact begin on that day.

At this time, it's not entirely clear here at Optopolis what the plans are for the old building.

What are your thoughts of the relocation? Let us know in the comments!