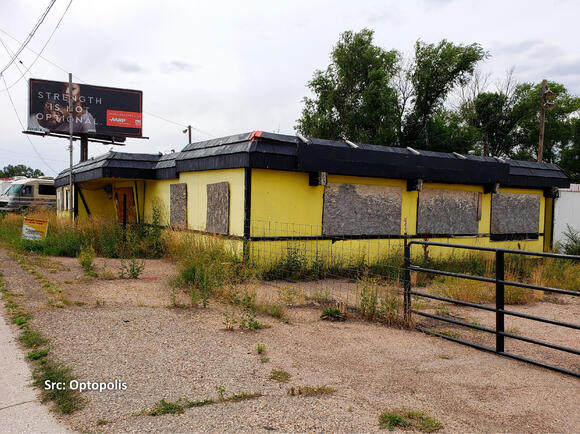 If you've been out on South Greeley Highway near Mark's Motors recently, you may have noticed something missing... that thing being the ancient A&W Root Beer Drive-In! It has been demolished!

This building dates back to 1955--that is, the build date listed in the property assessor. It was one of two Cheyenne A&W Drive-In locations. As reflected in an article from Grateful Mike on KingFM, one of the more recent tenants to occupy the South Greeley space was Nifty Fifty's.

There may have been one or two other tenants to occupy the space as well, but if so, it is not currently known here at Optopolis what those tenants may have been. If you know more info, it would be greatly appreciated if you could share your knowledge in the comments.

The building had most recently been abandoned well over a decade ago, slowly becoming overgrown by weeds and eventually getting surrounded by a fence.

Even with this fence, one could still potentially see some of the remnants of the interior of the building from along South Greeley Highway.

On a more subtle note, there was a 1-story home behind of A&W (noted as a Ranch 1 Story in the property assessor) that once stood, and it displayed the same build date (1955) as the A&W.

On June 27th, 2022, demolition plans were submitted to the county planning website. As of July 1st, demolition was already underway (special thanks to Standby News for sharing a video clip to Optopolis on that day, confirming this info).

With a recent visit over the last week (first week of August), the entire A&W building is gone in addition to the house behind of the A&W.

It appears even the foundation of each of the buildings have been ripped out, leaving the plat as an entire lot of dirt! The only noticeable remnant is the pipe work sticking out of the ground.

It's not exactly clear what the future holds for the property. As of the time of checking the county planning website on July 1st, there were plans submitted for a new to-be-named dentistry, but unfortunately, the plans appear have been totally wiped out--that is, one most likely could no longer find them on the planning website.

What would you like to see take over the space that was once occupied by the A&W Drive-In? Let us know in the comments!