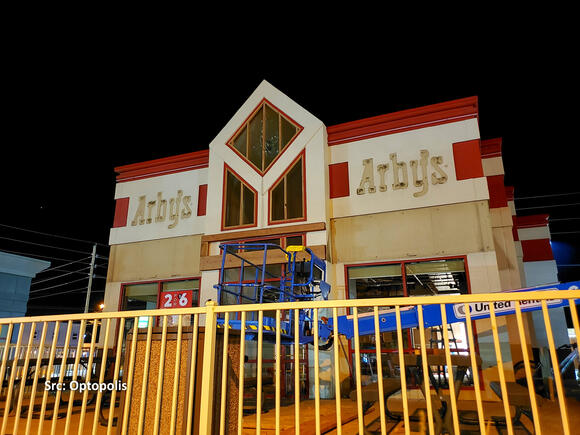 If you've been by the Arby's on Lincolnway recently, you may have noticed some various equipment sitting in front of the building… perhaps, you even noticed that many of the signs have been taken down. Here's what you need to know!

Although here at Optopolis, the exact original opening date of the Lincolnway Arby's isn't currently clear, it is clear this location has a long tail of history in Cheyenne; it dates back to at least the 70s and 80s as confirmed by a photo in the LeClercq Jones collection from 1979.

In said photo, you can tell the building used the 70s-equivelant of the Conestoga wagon-style. It even had the classic roast beef sign displayed, which is rather rare by today's standards!

The property assessor notes a build date of 2003 on the current building. Studying Google Earth, you can tell the previous building was demolished, and a new Arby's building was built just southwest of the old one.

As soon as June 22nd, permits and plans began to appear in the Cheyenne City Planning Website for a remodel. Arby's also previously officially announced a refresh of this location on a post on their main Facebook Page. It appears they aren't waiting to get a roll on this remodel, either!

A recent visit to the location reveals the old signage on the building already taken down, and new paint already starting to go up, while the interior lobby area has been completely ripped apart for the refresh.

Looking at the plans in the city website, it appears the building will retain the same general design it had previously; however, it will receive a paint job more reminiscent of the modern look of Arby's, including more whites, reds, greys, and dark browns, as can be seen on one of the temporary stake signs placed on the property.

All of the signage on the exterior of the building is set to be replaced with modernized signage. The standalone sign on the corner of Evans and Lincolnway is also scheduled to be replaced according to another set of plans in the city planning website.

It appears the drive thru will remain open throughout the remodel; at the time of snapping these photos, this was the case as revealed by numerous signs at the parking lot entries.

This is the first Cheyenne Arby's to begin using the latest Arby's aesthetics; which style of restaurant do you like better? Let us know your thoughts in the comments!