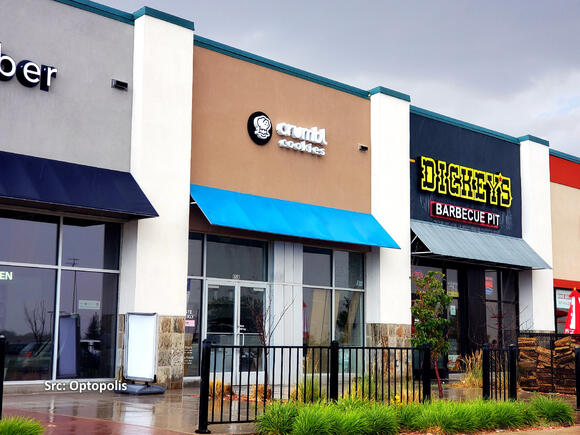 If you've visited the Frontier Mall recently and passed by the northwest mall entry, you may have noticed a new sign at the former AT&T space!

Previous history of the space

Longtime residents of Cheyenne will likely remember when this entire space - Sleep Number, AT&T, Dickey's BBQ Pit, and Five Guys Burgers and Fries - were all a part of Cheyenne's Old Country Buffet. Although it's not currently clear here at Optopolis if Country Buffet was original to this space at the Frontier Mall, it is known that Country Buffet was here for many, many years.

Unfortunately, it was around the turn of the 2010 decade that things for Country Buffet (and other associated buffet restaurants such as Ryan's Buffet and Hometown Buffet) began falling apart.

In 2012, the at-the-time parent of Old Country Buffet, Buffets Inc., filed for Chapter 11 Bankruptcy; the closures that would result included the Cheyenne location, which closed by June. By the following year, the space would already be renovated with the Cheyenne Five Guys Burgers and Fries opening in August.

Sometime between the years 2017 and 2018, AT&T would move from its old Frontier Mall location that took over the Time Out arcade to the space between present-day Dickey's and Sleep Number. The new AT&T store wouldn't be open for much longer, however, closing in early to mid-2021.

That year, the signage was taken down and the interior was emptied out.

In January 2022, a Plan Review would be added to the permits section of the Cheyenne City Planning website, labeled with the project name...

Renovations wouldn't start till closer to the middle of the year, when a lot of speculation and excitement began spreading across social media about the Cheyenne location. Many people kept asking similar questions along the lines of, "When is Crumbl Cookies [in Cheyenne] opening [at the mall]?"

As of right now,* there is no confirmation of when Crumbl Cookies will be opening the Cheyenne store, but with signage up, they surely must be getting close to being able to open.

Previously (early August), the word on the street was that Crumbl was planning to open the Cheyenne store in late August.

According to an Instagram post from the official @crumblcookies Instagram page, they are set to open their doors on Friday, August 26th from 8 am until midnight, referencing the day as the "Grand Opening celebration for out Cheyenne store!" You can see this announcement post on FaceBook as well.

Since the time of the original article, they also added a backdrop behind of the Crumbl sign, as seen below.

Are you excited to get some sweet snacks at the mall? Let us know your thoughts of Crumbl Cookies' Cheyenne expansion in the comments!