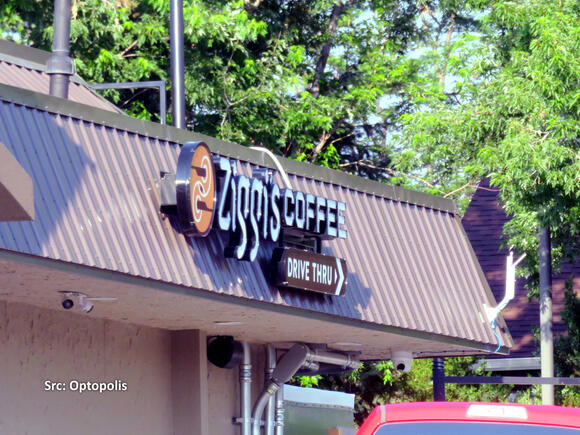 Site plans for a new Ziggi's Coffee have been submitted at what was previously the Stag Oil Co. on the corner of Pershing Boulevard and Airport Parkway.

The property in a historical sense

You may recall the article here at Optopolis on Cheyenne's second Chase Bank location taking over the Stag Convenience Corner on Yellowstone road; that station has a direct connection to the Stag Oil Co. that once stood at this location along Pershing Blvd. It was owned by the same person - James R. Fleenor of Stag Enterprises; Fleenor passed away in 2014.

Although the pictures in the property assessor for the Stag Oil Co. are long gone, the build date is still listed, showing the year 1972. As of 2011, it was still operating; however, it closed and was demolished by the year 2018.

It turns out there were plans in 2016 for a brand new drug store/café at this location that would have been called Legend Drugs (or Legend Pharmacy as displayed on a sign on the proposed building). An entire set of site plans and elevations can currently be seen in the Cheyenne City Planning website.

It appears plans of some sort were still underway until at least October 2017. Unfortunately, there is little more info about it, and plans have clearly since fallen through.

Previously in 2021, Wyo Snow Co., a shaved-ice beverage trailer, has been setting up shop in the parking lot of this property. If they weren't somewhere else for an event such as at Blue FCU's 70th anniversary, Wyo Snow Co. usually was located at this street corner. This year, however, Wyo Snow Co. has been located out off of Lincolnway in the parking lot just east of First Church-Christ Scientist, which Google Maps currently displays as permanently closed.

Today, about all that remains of Stag Oil Co. are the lamps that once lit their property at night as well as most of the concrete that surrounded the station.

As soon as December 2021, things began appearing in the Cheyenne City Planning website for a new Ziggi's at this location. In February of this year, site plans were officially submitted. The Site Plan project item includes elevation views that display the overall style of the building.

Elevations share that it's set to use a mixture of stucco and stone veneer on the exterior of the building. The overall façade will have a design reminiscent to that of other Ziggi's locations; including but not limited to a Fort Collins, CO location (though with its own unique twists). It appears the proposed new Cheyenne location is set to have an exterior walk-up window in addition to the drive thrus, but no inside area as some of their other locations have done.

Vicinity maps show plans to extend the Braun Drive alleyway for the entry to the parking lot as well as two drive thrus that run on either side of the building. The Airport Pkwy and Pershing Blvd entries would be closed off with curbs and gutters.

Although this would be a second Cheyenne location for Ziggi's, it's not entirely clear at this time if this would simply be a second location or if Ziggi's on Yellowstone would be moving to the Pershing Blvd location. The Pershing location isn't currently listed as a location on the Ziggi's website, but it appears things are actively progressing, with an Engineering Plan Review being submitted in June of this year.

Have you visited Cheyenne's first Ziggi's yet? Are you excited at the prospect of a more central location in town? Let us know your thoughts in the comments!