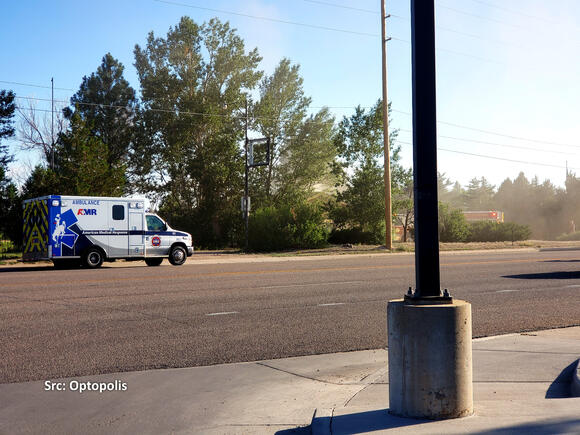 Smoke still billowing from the Mc Intyre building as of 6:26 PM MDT -Optopolis

Around 6:15 PM MDT on July 12th 2022, a fire was reported over the scanners at the former Mc Intyre's Garden Center on Dell Range Blvd!

To clear up some confusion, the referenced building is located just east of the Key Explorer's Preschool that previously took over the former Building Blocks, also former IBMC.

According to the property assessor, the building that caught fire was built in 1982, and it also received an approx. 400 sqr feet expansion in 1984.

Although at this time, very little else is known about the history of the building, it is known that the building was occupied by a nursery called Mc Intyre's Garden Center as confirmed by US-Garden.

In fact, checking out the satellite imagery from 1994, one can see the fields where plants (likely trees) were planted, very similar to which one would typically see at a nursery or garden center.

The building has been vacant for quite some time; even in 2007, the property was overgrown with weeds. The building received a paint job around the early to mid-2010s. More recently around the turn of the 2020 decade, the place had been mostly boarded up, left frozen in time.

This evening (July 12th) at around 6:15 PM MDT, Cheyenne Fire Rescue and Cheyenne Police Department began dispatching emergency vehicles to the location of a fire on Dell Range Blvd. Some credit is due to Standby News, who discovered what was happening moments before we here at Optopolis did, notifying us in the process.

Moments before the first fire truck pulled up, smoke was already billowing onto Dell Range Blvd. Within minutes, the haze had spread to the street running east and west behind of McDonald's and Chase Bank.

Dell Range Blvd would be quickly blocked in the eastbound direction, with traffic being redirected onto Ridge Road.

As of 6:36 PM MDT, the fire had died down, although smoke could still be seen coming from one of the duct pipes on top of the building, as seen in the below video.

In case it fails to load, here's a link to the above video.

The building is still standing, however, it wasn't without some damage. A revisit later in the evening (Jul 12) reveals several holes in the building, including one cut by fire crews into a board in a window.

A fire truck is still be stationed outside as of the time of update photos, likely in case the structure reignites.

With the building being burnt, it's at risk of being demolished soon. Perhaps there's a positive side to this; what would you like to see take the place of the former Mc Intyre's? Let us know in the comments!