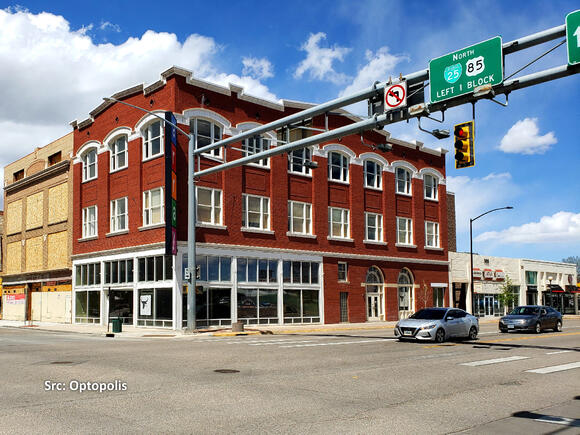 Do you recognize this building? This is the Grier building on the corner of Central Avenue and East Lincolnway. It now has a new tenant-specifically having to do with horse racing-which has opened up shop in what was previously Dillinger's Bar.

A look at the history of the Grier/Gleason Building

Constructed in the 1910s (Sometime between '11 and '13 depending on your source*), Gleason Mercantile Co's name came from F.E. Warren's general store's manager. According to a PDF on the Cheyenne City website, the original store located in the Warren Building had outgrown its space, resulting in the choice to build the new store.

It appears since at least 1950, the store has been known as Grier Furniture; in fact, a map from around 1955 confirms this, with the label "Grier-Morris Furniture Co" listed at Central and Lincolnway. For at least a part of the building's life, it was also home to Finkbiner Funeral Parlor, as specifically noted in the Downtown Cheyenne Walking Tour guide.

As can be seen in the 2007 Google Maps Street View, Grier Furniture was in the process of closing up shop, advertising the La-Z Boy Furniture Gallery on one of the exterior sides of the store at the time.

A line of new businesses come and some of them go

1) In summer of 2013, the lower level and the mezzanine both got replaced by a new restaurant called Los Abuelos. Some of their food was captured on a post from High Plains Gastronome.

Unfortunately, it faced sufficient struggles to the point of closure; in 2016, they decided to pull the plug and close the restaurant down, once again leaving the space vacant.

Soon thereafter, they replaced the Los Abuelos signage with their own "array" signage. Although the signage has since been replaced once again with the new-in-2022 lower-level tenant, it appears Array is still there, specifically on level four, according to their website that also displays info for the 2022 school year.

3) Dillinger's Bar launched plans to take over the former Los Abuelos space in 2019 (as mentioned in this article on KingFM), opening by 2020.

On March 11th, 2022, they closed the doors to their space, announcing plans just a few days prior to soon reopen in another space in downtown Cheyenne, confirmed by a post on their Facebook Page.

You can see the old Dillinger's Bar space when it was vacant in a video from the Optopolis Shorts and Clips channel below:

If above video doesn't load, you can see this video here.

Earlier this year in March, plans were submitted to the city planning website for Wyoming Horse Racing's Horse Palace at the now-former Dillinger's Bar. This was set to become their second Cheyenne location, their other Cheyenne location already open in the small plaza in front of Petco.

By mid-June, things were well underway, with all kinds of machines inside of the space, many of which can be seen the day before they opened in one of Standby News' live streams. They mentioned that they were set to open at 5:30 PM on June 24th to Standby News in his visit.

Within the next 24 hours from the time of Standby News' live stream, they already had taken down the Array signage on the corner of the building, replacing it with signs advertising the new WHR location.

*The property assessor lists a build date of 1911, while other sources state that the Gleason building was built in 1913.