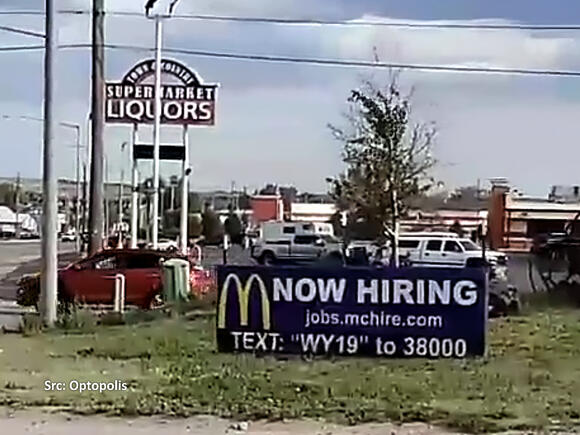 "Now Hiring" sign as seen in a recent live stream -Optopolis, within Chapter 3:06:15

If you've been on the south side of town recently, you may have noticed a sign indicating that McDonald's is building a new location... Perhaps, you may even have seen the "now hiring" banner at the site of the soon-to-be McDonald's. Here's some McD history as well as what's known so far!

A glance at McDonald's previous Cheyenne locations and history

McDonald's roots in terms of Cheyenne go back to 1958, when McDonald's was beginning to look at opening a Cheyenne location, as noted on page 114 of this E-Book on Yumpu. The very first Cheyenne McDonald's location is the one any Cheyenne resident will likely recognize, located on E Lincolnway near Hot Springs Avenue; the E-Book notes that it originally opened in 1959.

The location has undergone several redesigns over the years, most recently being demolished and rebuilt sometime between late 2012 and the end of 2013 in favor of what many may call the "eye brow" design.

The Walmart location closed in early to mid-2020 amid the pandemic. All the other Cheyenne locations besides the Walmart location have been either renovated or rebuilt at least once and within the last decade (give or take about one year).

The new McDonalds location and what the plans look like

The new McDonald's is set to be built in a section of the land just south of The Outlaw Saloon that previously has been used as extra parking for The Outlaw as well as by semi-trucks in years past.

Site plans dated February 18th, 2022 posted in the Laramie County Planning Website indicate that the new McDonald's will be placed at the corner of W Jefferson Rd and S Greeley Hwy. There's set to be an "Extra Property" of about 65,100 sqr feet between McDonald's and The Outlaw that could be used for some other establishment.

This McDonald's is expected to have a more generalized design, more similar to the design of the Yellowstone Rd/W Carlson St location that was just rebuilt in mid to late 2020. In fact, according to the site plans, it is set to also have three different windows for the drive thru.

Are you excited to finally see a McDonald's on the south side? Let us know your thoughts of the planned new McDonald's in the comments!