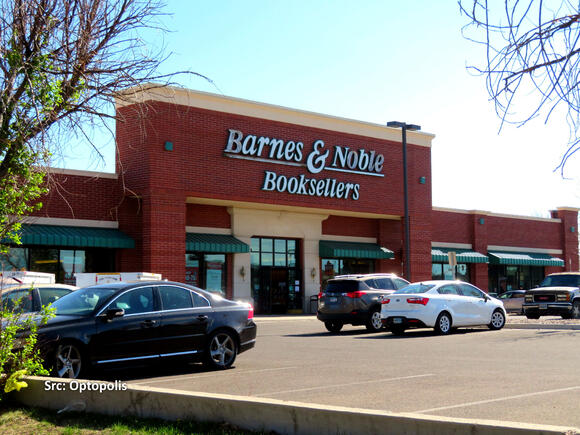 You may recall that Barnes & Noble announced they would be relocating; they had their last day at their old location on May 15th. Here's what is next.

A touch of background...

As shared in a recent post here on Optopolis, Barnes & Noble Cheyenne announced it would be relocating, B&N Cheyenne reporting that it was a result of the landlord choosing to opt out of renewing their lease.

By August 2021, it was apparent that a new tenant was coming due to conflicting land use labeling in plans for a new truck loading bay design (plans labeled in the Cheyenne City Planning website as "Barnes & Noble Loading Dock," while the Transportation Worksheet states "specialty grocer") although it wasn't known here at Optopolis that a new tenant was coming until after Natural Grocers had submitted site plans in 2022.

The plans submitted to the Cheyenne City Planning website for the new Natural Grocers store state that Natural Grocers would take over just more than half of the existing building (about 13,000 of the approx. 23,200 sqr feet).

Previously, B&N's goal was to be open at their temporary mall location by August. B&N also announced they'd be taking over the old locations of All Wild Western and Asian Gift, both of which have moved to different locations in the mall. Signs have since been posted in the windows of the old All Wild Western saying "Barnes & Noble is coming soon."

What is happening now...

Barnes & Noble has announced on their Facebook page when they are planning to open at their new location.

As of June 16th, the soon-to-be B&N space at the Frontier Mall hasn't began renovation of the two stores (both the old All Wild Western and Asian Gift) although renovation of the space is likely about to begin since B&N has announced they are planning to open on September 28th.

As for the old location, renovation is already well underway for the new Natural Grocers! Within days (by June 2nd) of Barnes & Noble closing their old store, fencing was already surrounding a portion of the parking lot. Now, renovation of the interior has already begun, as well as reconstruction of the loading bay area.

Are you excited for the new Barnes & Noble and Natural Grocers store locations? Let us know in the comments!

Burlington is coming to Cheyenne, Wyoming!