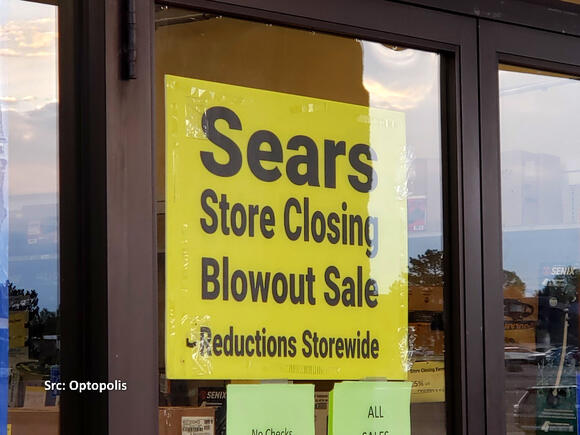 Cheyenne's new Sears that recently opened in the Cheyenne Plaza off of Lincolnway and College has announced it planning to close!

Sears originally had a small store in downtown Cheyenne, located where Two Doors Down resides today (you can see that location in in this article from 101.9 KING FM or directly from the LeClercq L Jones Photograph Collection.

They moved to the area of the Frontier Mall, opening at the new location (built 1980 according to the property assessor) around the time the mall opened, the mall opening in 1981. By the end of 2017 (just a few months after the last Cheyenne Kmart closed), that Sears announced it would also close, closing in January 2018.

Over the last three years, Sears Hometowns have been opening across the nation including a brand new one in Minot, ND and another one that relocated from northwestern Colorado to Laramie, WY.

Two things that separate Sears Hometown from the traditional Sears department store are 1) Sears Hometowns are typically owned either locally or by a franchisee, and 2) Sears Hometowns are small stores focused on tools and appliances instead of all the departments you would see in a 70s/80s/90s format Sears. You can see this difference for yourself in the ribbon cutting event video that the Cheyenne Chamber of Commerce and REMAX previously held at the Cheyenne store:

The Cheyenne Sears Hometown store began setting up shop in December 2021 in a space that was used as a Walmart Recruitment Center when the new Walmart along Campstool Road near I-80 was being constructed.

Over the last four months or so, they even installed new signage on the Cheyenne Plaza signs - both the one along Lincolnway (taking the place of the old Big Lots location's signage) and the one at the corner of College and 12th.

The Sears Hometown announced on their Face Book page on May 15th that they would be closing the new Cheyenne store. This is in addition to many other Sears Hometowns across the country that also announced they were closing, including Augusta, GA; Victoria, TX; and Moses Lake, WA according to the respective linked news articles.

At this time, there are only two Wyoming Sears Home Town Stores known to be closing-- the Cheyenne, WY store and the Cody, WY store.

Today, closing/liquidating signage is posted in the Cheyenne store's windows as well as along both 12th and Lincolnway. At the time of typing, it's unknown exactly what day the Cheyenne store will close for the final time.

Were you aware of the new Cheyenne Sears store? Will you miss it? Share your thoughts in the comments!