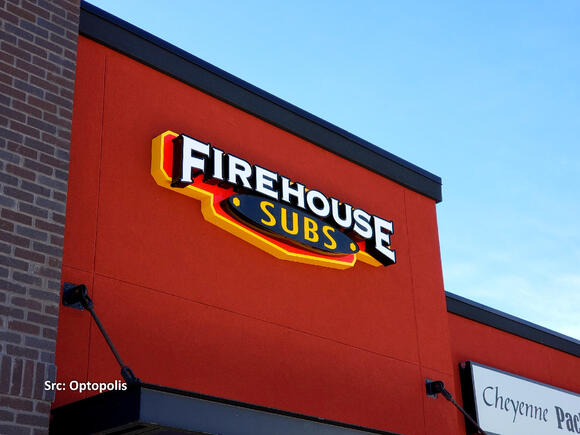 Firehouse Subs is set to open its first Cheyenne - and Wyoming - location in the Pershing MarketPlace!

Pershing MarketPlace is an up-and-coming plaza that had signs up of future development in 2018 and began seeing businesses get built and opened in 2019. It took over the entire block between McCann Ave/North College Dr and E Pershing Blvd/Atkin St, part of which was previously occupied by a long-since-vacated home.

Qdoba Mexican Eats opened its second location in 2019, followed by Dog Haus Biergarten opening its first Cheyenne location at the start of 2020.

Dazbog opened its second Cheyenne location roughly in the center of the plaza in 2020. The same year, North Platte Physical Therapy (previously at the former Hollywood Video now AeroCare) relocated to the building just west of Qdoba.

Dog Haus expanded to Cheyenne with its Biergarten location just south of Qdoba. Castorena's Granite & Quartz LLC opened its show room in the space directly next to Dazbog Coffee.

With all these businesses, it left only one space within the existing buildings needing occupied, and it appears that the final empty tenant space is now going to be occupied!

As soon as a month ago, it was noticed here at Optopolis that some kind of construction work was happening inside Unit C at 3901 E Pershing Blvd (the soon-to-be Firehouse Subs location between Cheyenne Pack and Ship and CellOnly Verizon), but it wasn't clear exactly what was happening there... That is, until recently.

KGAB did an article mentioning Firehouse Subs was set to come to Cheyenne, sharing the fact that the future Cheyenne location is now listed on Firehouse Subs' website. Sure enough, a visit to the space revealed not only that Firehouse Subs was coming, but coming in June of this year according to stickers in the windows. Permanent signage was also already installed on both sides of the building.

At the time of visit, one could tell from a distance that the inside was still not finished, but work on the space was actively continuing.

Have you tried Firehouse Subs before? And if not, are you going to try their subs?

Let us know in the comments!