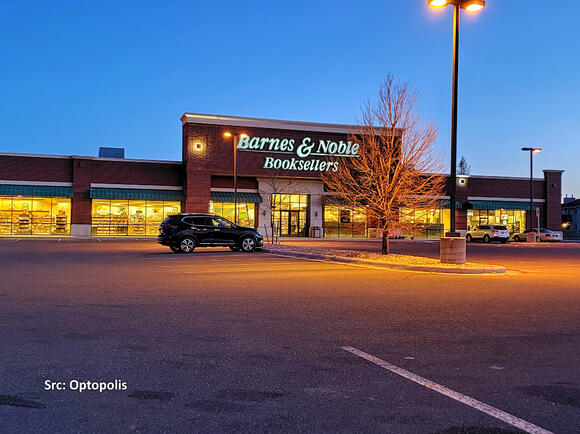 Barnes & Noble the night before the moving sale began -Optopolis

Late in the day on Wednesday, March 30th, Barnes & Noble Cheyenne announced on their social media they were gonna have to relocate. It's now known where they are planning to relocate (temporarily) and roughly when they are set to reopen.

Cheyenne originally saw B&N open at its current location on Dell Range in 1995. Previously on March 31st, B&N officially began their moving sale with a planned last day of May 15th.

In addition to the landlord opting out of renewing B&N's lease, it appears that B&N is closing and moving as a partial result of Natural Grocers Vitamin Cottage wanting a larger, more modern space for their store as both submitted site plans in the Cheyenne City website and an article from Cap City News confirm.

The B&N building will not be demolished, but it will receive at least minor TLC, splitting the space into two tenants in the process; the larger of the two spaces (about 2/3 of the building) will be occupied by Natural Grocers, while the other tenant still appears yet to be announced.

Initially, B&N was planning to reopen as soon as the end of spring in a space at the Frontier Mall; however, like with any challenge or adventure, things have changed slightly, and the planned reopen date has shifted to summer of this year.

As early as two days ago on May 6th, word was going around that B&N Cheyenne determined what space(s) in the Frontier Mall that they'd be moving into, and a recent visit to both places confirms exactly where B&N is set to be.

Located at the west end of the Frontier Mall just south of the JAX Outdoor Gear mall entry, B&N is looking to combine two existing spaces to make about 6,000 square feet of space at less than half the size of the existing store (around 23,000 square feet).

More specifically and as shown in the above photos, the two spaces B&N will soon occupy include Asian Gift (former Nature's Touch--Asian Gift was once located in one of the spaces now occupied by Joann's) and All Wild Western (which once was occupied by DEB).

Asian Gift moved next door to their old space, putting them directly next door to JAX, and they are already open again. All Wild Western moved to the former Justice that was once occupied by Hallmark Gold Crown, and it appears to be about ready to reopen.

When will B&N Cheyenne reopen?

Because B&N is temporarily moving into two currently-separated-spaces, they need to tear down the dividing wall between the two spaces; as a result, B&N plans to reopen sometime this summer (July or August according to the Cheyenne store).

After this point, B&N Cheyenne still desires to keep its store in Cheyenne and has said it would like to eventually permanently move to a new space with roughly its original location's size (around 23,000 square feet).

Where do you think Barnes & Noble should permanently reopen?

You can share your thoughts in the comments, or perhaps even better, to quote B&N's social media post,

We would be grateful for any suggestions for potential new locations we might have missed -- please email us at MyBarnesandNoble@bn.com, adding "Cheyenne" in the subject line. ~ @bncheyenne

You can see the first day of B&N's moving sale here: