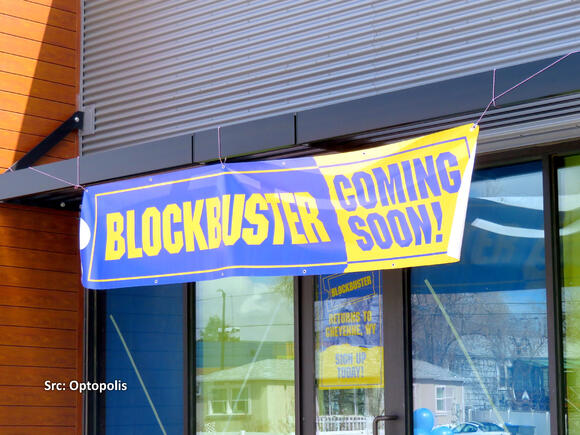 History of Blockbuster as it relates to Cheyenne

This part is serious. Although the exact year of Cheyenne's Blockbuster's opening isn't currently known here at Optopolis, it is known that Blockbuster opened their first Cheyenne store by the turn of the twenty first century, replacing some other small clothing/department store. Blockbuster closed sometime after the main company filed for Bankruptcy in September of 2010.

About nine years later in 2019, Blue Federal Credit Union had purchased the entire Cole Shopping Center with the intent of replacing the then-dilapidated-and-derelict buildings with their headquarters. The HQ was built and operational by the end of 2020, with Blue beginning to look for tenants to occupy the retail buildings on the south end of the property.

On April 1st, 2022, Blockbuster Video signage suddenly appeared in the doors and windows of the unoccupied tenant next to the HQ bank branch; a banner hung on the Converse Avenue side of the building. It's apparent that this location was chosen because it was nearest to the real, original Blockbuster store that was demolished.

This is a highly unlikely scenario that Blockbuster would actually make a comeback, meaning that this was an April Fools joke.

What ISN'T a joke, however, is that Blue is doing a giveaway of something Blockbuster-themed. Users can visit their April Fools post and comment their favorite movie from the 80s or 90s to be entered into a giveaway.

You can see a video of the April Fools event on Optopolis' main YouTube channel and on Optopolis' Shorts and Clips channel, both embedded below: