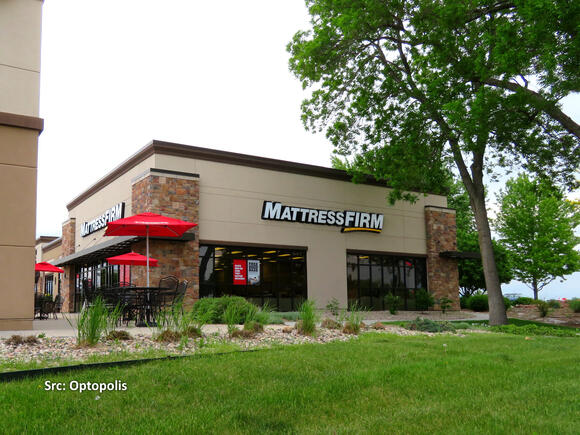 You may have previously noticed that there is some form of construction going on in front of Cheyenne's current Hobby Lobby location! Here's a look at the site and what to expect.

Previous use for recycling!?

The part of the parking lot that the new Mattress Firm is set to be built was previously used for recycling bins. It was one of the many locations around Cheyenne where you could recycle paper, cardboard, glass, etc.; even plastic shopping bags!

The bins were removed around the turn of the 2010s. Today, the one remnant of the recycling bins is the sign post that advertised this as a recycling area.

The original site plan was submitted on April 15th, 2021 according to the Cheyenne City planning website. A few months later in November 2021, an updated plan was submitted. As of earlier this month (March 2022), the vicinity had already been blocked off and the pavement was already ripped up for the future building's foundation.

The elevation views reveal that this Mattress Firm will appear more elongated than Loveland's Mattress Firm from side to side, and the site plan reveals that it will be a single, standalone store with about 4,500 square feet of floor space.

The front of the building is set to face Dell Range Blvd. Most of the trees and drainage area between Mattress Firm and Dell Range will be left untouched aside from the removal of dying/dead trees noted as Chokecherry Trees in the Revised COR Conditions Landscape plan.

It appears the façade will use similar aesthetics to those used on the Hobby Lobby and the neighboring empty tenant space; car parking is set to be placed around the outer edge of the building while two bike racks (designed to lock two bikes each) are planned to be placed at the SE corner of the building.

Now for the classic question...

Are you looking forward to having Mattress Firm in Cheyenne? Will you be getting your next mattress there? Share your thoughts in the comments!