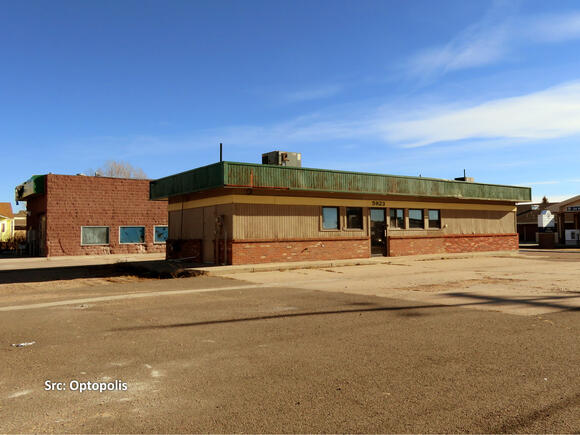 A view of Stag Convenience Corner from Yellowstone Rd -Optopolis

A drive down the stroad called Yellowstone Rd reveals an old gas station/car wash (aka Stag Convenience Corner), and it appears its life is limited, as plans have been submitted for a new Chase Bank.

History of the gas station and car wash

A surprised yet failed reuse...

By 2018, the pumps had been removed, leaving only the underground tanks and the two buildings that made the Stag Convenience Corner still standing.

As it turns out, that year, Pizza Hut had plans in effect to expand the convenience store building to open up shop here, adding a drive thru in the process. Unfortunately, the plans never fully coalesced, and they appear to have expired in 2020. It's unclear what would have happened to the existing Yellowstone Pizza Hut location, especially seeing how close it is to this location.

By 2020, City Flavors, a local shaved-ice establishment, began setting up shop in front of the old gas station. Every summer so far, they've placed their trailer in the lot. Whether they will be here again this year (2022) or not is unclear, but they have indicated that they plan to open this summer on their FaceBook Page.

In 2021, the car wash caught fire. The exterior of the building was mostly untouched, but the inside was burned to ashes.

Chase Bank had already expanded to Cheyenne in 2020, beginning to taking over the old Showtime Video USA/Wyoming Work Warehouse location near Kingsoopers; that location opened by 2021.

Currently, the bank is set to be built roughly in the positioning of the convenience store building, and a parking lot would replace the car wash building.

If things do work out for this bank, will you be using their service? Feel free to share your thoughts in the comments!