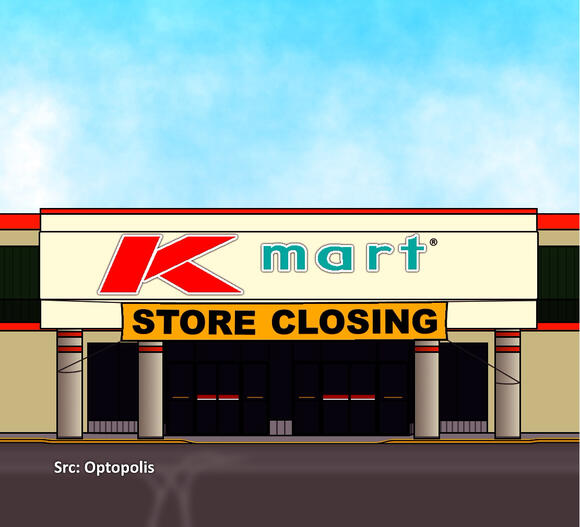 Over 800 miles away and in another state, and you are asking, "Why?" Three reasons - it's Cheyenne's nearest Kmart; the last Kmart in the mountain time zone; and best of all, the last TransformCo Kmart that still uses the classic retro signage!

A brief history of Kmart as it relates to Cheyenne

Just under three years later in February of 2020, Cheyenne's at-the-time-nearest-Kmart located in Loveland, Colorado would be announced to liquidate, closing on April 11th.

The new nearest Kmart to Cheyenne became Minot, ND at about 570 miles away; Hamilton, MT's Kmart was, then, the second nearest location.

Another blow to the brand, Minot's Kmart closed in July 2020 after fifty years of operation, putting Hamilton at the top of the list for Kmart stores nearest to farthest from Cheyenne.

It's unique because after all these years, it still displays its retro signage; while the inside did get updated, the sign on the exterior did not. But now, the store's death isn't far off...

Hamilton's Kmart has been announced to liquidate

Hamilton's Kmart is the last Kmart in the nation that uses the retro signage. The only Kmart stores that use anything that even slightly resembles that of the retro signage us Americans recognize are those in Australia, completely separate of TransformCo, and even that logo has its own differing appearance as pictured below:

On Jan 9th, 2021, rumor began to appear that the Hamilton location would close as a partial result of temporary job positions being added to the Sears website that day. (This is often something that happens when a Sears or Kmart is about to begin liquidation.)

On Jan 13th, the location would be confirmed as closing when it was added to the sb360 website as a closing location. According to KRTV, this location is set to close on March 6th, 2021.

Unfortunately, this is the only store of its kind in Hamilton. While Hamilton does have stores like Murdoch's, Albertsons, and Safeway, there is not another Big Box store that is as close to a "one stop shop" as this one. For instance, the nearest Walmart and Target stores are both in Missoula, MT, over 40 miles away.

Currently at the time of writing, there are only four Kmart stores left in continental US that are not currently set to close, with six others in other territories.

If you draw a straight line from Cheyenne to each of the other non-closing Kmarts, the nearest Kmart location is over 1,500 miles away in Avenel, NJ.

However, driving instructions from Google Maps indicate Westwood, NJ is the closest at 1,737 miles of driving (compared to 1,741 miles for Avenel). You can find all the remaining open stores on this map (since it was last updated on 1/11, Key West, FL is also now set to close).

What are your thoughts of Kmart's slow deterioration? Also, what store would you like to see take over this Kmart after it's gone?

*Special thanks to PlazaACME for providing Optopolis with some of the photos seen in this article!

The Hitching Post Inn standalone sign found along W Lincolnway in Cheyenne, WY remains standing -Optopolis. Back in May of 2021, there were talks of the city finally selling the condemned Hitching Post Inn to be reused for something better. By September, a purchase of the decaying property had been made, and demolition of the hotel is beginning to take place, with much of the old parking lot areas already torn out.