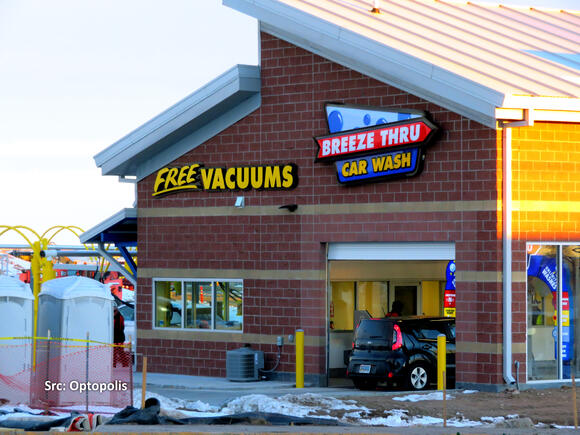 Breeze Thru has opened their third Cheyenne location; it is located on the south side along South Greeley Highway at the site of one of MJ Auto Sales' previous locations!

This property had a small building that was built in 1980; in recent years, it's been occupied by Frontier Cars and Trucks. By 2017, it was occupied by MJ's Auto Sales.

By 2018, Breeze Thru had plans to build the third Cheyenne location at the site of this car dealer, putting up a sign advertising their plans.

In 2021, MJ Auto Sales relocated further south to a different location (before relocating again later in the same year to Lincolnway about two blocks east of the now-demolished Hitching Post Inn) in order to make way for Breeze Thru to build their new car wash.

This left their old building vacant for a few weeks, just long enough to allow Optopolis to document the vacated building in June of 2021 before later being demolished (as seen below).

Breeze Thru has had a rather rapid expansion in Cheyenne. In 2010, they built their first Cheyenne location on Dell Range Blvd in front of Cheyenne's original Walmart. They built their second location on Pershing Blvd near the new Pershing MarketPlace in 2019.

By October 2021, the new car wash on South Greeley Hwy was already well underway with much of the structure already standing, as revealed by Google Maps Street View.

In December, it became very obvious what the overall shape of the building resembles - that of most Breeze Thru Car Wash locations. By the end of the year, it was expected to open by January 10th, 2022 as further indicated by the comments of a recent post on Breeze Thru's page.

Here are some photos from early December of the car wash being nearly built. Notice the bill board just to the north of the building advertising the new location.

The Car Wash opens for the first time!

Today on January 8th, the car wash opened for the first time, offering free car washes for the first month or two while they work out the kinks and bugs as well as ensure the process is a smooth as can be, according to this post.

Here's a look at the car wash late this evening (Jan 8)!

Will you be visiting this new location? Tell us in the comments!

The Hitching Post Inn standalone sign found along W Lincolnway in Cheyenne, WY remains standing -Optopolis. Back in May of 2021, there were talks of the city finally selling the condemned Hitching Post Inn to be reused for something better. By September, a purchase of the decaying property had been made, and demolition of the hotel is beginning to take place, with much of the old parking lot areas already torn out.