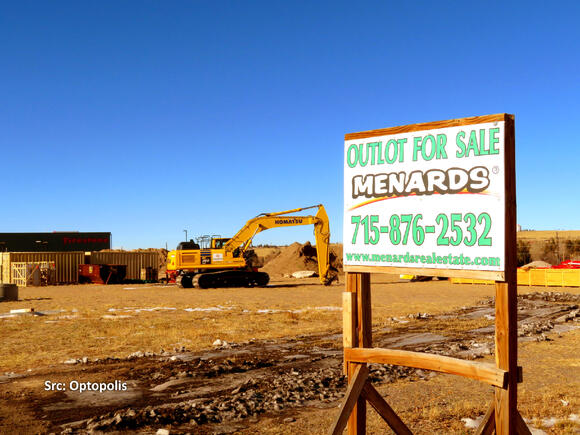 Only nine years after Menard's opened in Cheyenne, a third outlot of theirs is getting used by a tenant!

One of the earliest tenants to show interest in the area was Chick Fil A, which lead to Wyoming's first standalone/drive thru Chick Fil A (second location* in Cheyenne) opening in 2015. They used the outlot on the corner of Windmill and Dell Range.

In mid-2020, a second outlot would become occupied, with Firestone Tires making a comeback to Cheyenne that year. Their building was built in the space directly east of Chick Fil A.

Just within a year later, it was announced that Tommy's Express Car Wash, an automatic drive-thru car wash, would be expanding to Cheyenne, Wyoming.

Now in 2022, Tommy's Express Car Wash is in the process of being built on the outlot directly east of Firestone Tires. It appears this one stretches closest to Dell Range of the three occupied outlots. At the moment, it's unclear when it will open, but it likely will be opening within the next few months.

Here are some recent photos of the land being prepped for the new building.

Soon, it's possible you could get new tires, grab a sandwich, and drive thru the car wash all in one go! Oh, and don't forget to pick up some hardware for your next project.

*Cheyenne's original Chick Fil A was in the Frontier Mall; briefly in 2020, they put a make-shift drive thru in the mall parking lot. Sadly by 2021, it had closed.